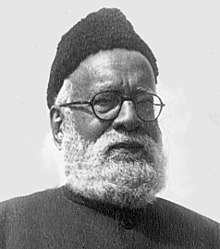 Syed Ghulam Bhik Nairang (26 September 1876 – 16 October 1952), also known as Mir Nairang, was a distinguished lawyer, a poet and a prominent Pakistan Movement leader. He held the office of Deputy Leader, from 1938 to 1942, with the All-India Muslim League in the pre-partition India.
He was close friends with Allama Muhammad Iqbal, a college hostel-mate and a fellow poet.[1] Nairang had sketched Allama Iqbal's personality as a college student and had described the exact location of his college hostel room in an article that he wrote at that time. Allama Iqbal had resided in that hostel room between 1895 and 1900.
In 2016, the evidence mentioned about Iqbal's hostel room in Nairang's article helped the Government College's staff in tracing the exact location of his room.
Book: Kalaam-e-Nairang - Nairang's compilation of poetry was published in 1982 from Karachi, Pakistan (first edition in 1907, second edition in 1917, third edition with detailed introduction by Moinuddin Aqeel in 1982)