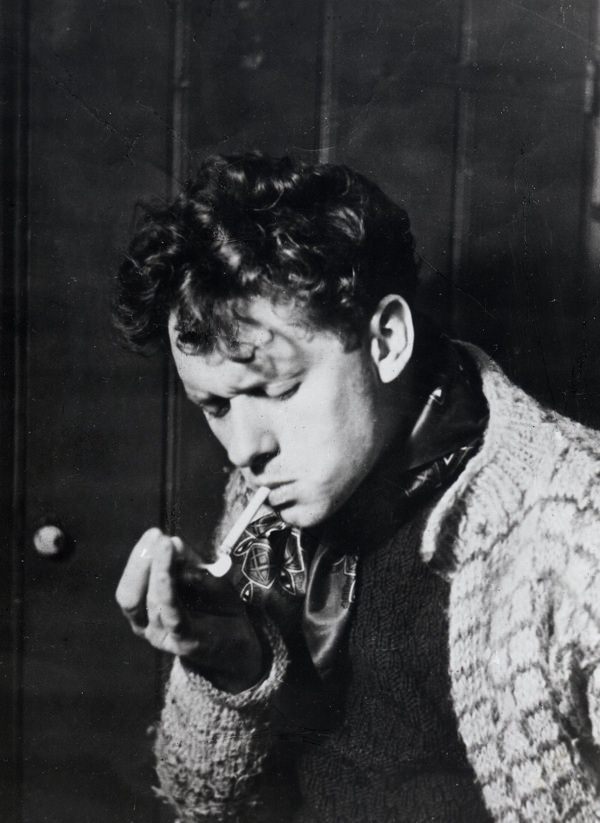 Dylan Marlais Thomas was born on October 27, 1914, in Swansea, South Wales. His father was an English Literature professor at the local grammar school and would often recite Shakespeare, fortifying Thomas's love for the rhythmic ballads of Gerard Manley Hopkins, W. B. Yeats, and Edgar Allan Poe.

Thomas dropped out of school at sixteen to become a junior reporter for the South Wales Daily Post. By December of 1932, he left his job at the Post and decided to concentrate on his poetry full-time. It was during this time, in his late teens, that Thomas wrote more than half of his collected poems.

In 1934, when Thomas was twenty, he moved to London, won the Poet's Corner book prize, and published his first book, 18 Poems (The Fortune press), to great acclaim. The book drew from a collection of poetry notebooks that Thomas had written years earlier, as would many of his most popular books.

Unlike his contemporaries, T. S. Eliot and W. H. Auden, Thomas was not concerned with exhibiting themes of social and intellectual issues, and his writing, with its intense lyricism and highly charged emotion, had more in common with the Romantic tradition.

Thomas describes his technique in a letter: "I make one image—though 'make' is not the right word; I let, perhaps, an image be 'made' emotionally in me and then apply to it what intellectual & critical forces I possess—let it breed another, let that image contradict the first, make, of the third image bred out of the other two together, a fourth contradictory image, and let them all, within my imposed formal limits, conflict."

Two years after the publication of 18 Poems, Thomas met the dancer Caitlin Macnamara at a pub in London. At the time, she was the mistress of painter Augustus John. Macnamara and Thomas engaged in an affair and married in 1937.

In 1940, Thomas and his wife moved to London. He had served as an anti-aircraft gunner but was rejected for more active combat due to illness. To avoid the air raids, the couple left London in 1944. They eventually settled at Laugharne, in the Boat House where Thomas would write many of his later poems.

Thomas recorded radio shows and worked as a scriptwriter for the BBC. Between 1945 and 1949, he wrote, narrated, or assisted with over a hundred radio broadcasts. In one show, "Quite Early One Morning," he experimented with the characters and ideas that would later appear in his poetic radio play Under Milk Wood (1953).

In 1947 Thomas was awarded a Traveling Scholarship from the Society of Authors. He took his family to Italy, and while in Florence, he wrote In Country Sleep, And Other Poems (Dent, 1952), which includes his most famous poem, "Do not go gentle into that good night." When they returned to Oxfordshire, Thomas began work on three film scripts for Gainsborough Films. The company soon went bankrupt, but Thomas's scripts, "Me and My Bike," "Rebecca's Daughters," and "The Beach at Falesa," were made into films. They were later collected in Dylan Thomas: The Filmscripts (JM Dent & Sons, 1995).

In January 1950, at the age of thirty-five, Thomas visited America for the first time. His reading tours of the United States, which did much to popularize the poetry reading as a new medium for the art, are famous and notorious. Thomas was the archetypal Romantic poet of the popular American imagination—he was theatrical, engaged in roaring disputes in public, and read his work aloud with tremendous depth of feeling.

Thomas toured America four times, with his last public engagement taking place at the City College of New York. A few days later, he collapsed in the Chelsea Hotel after a long drinking bout at the White Horse Tavern. On November 9, 1953, he died at St. Vincent's Hospital in New York City at the age of thirty-nine. He had become a legendary figure, both for his work and the boisterousness of his life. He was buried in Laugharne, and almost thirty years later, a plaque to Dylan was unveiled in the Poet's Corner of Westminster Abbey.