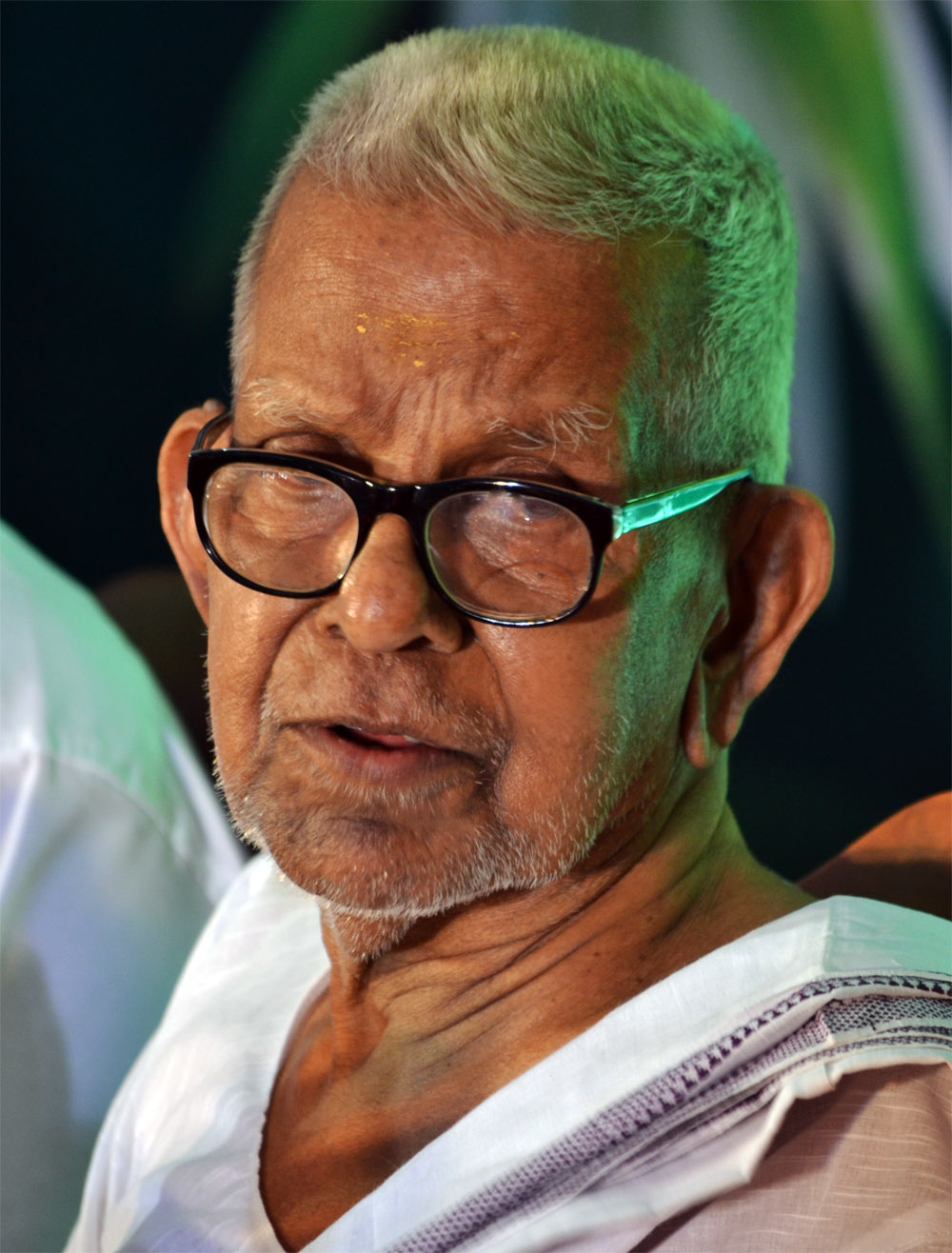 Akkitham Achuthan Namboothiri (18 March 1926 – 15 October 2020), popularly known as Akkitham, was an Indian poet and essayist who wrote in Malayalam. He was known for a simple and lucid style of writing, exploring themes of profound love and compassion in his works. Some of his prominent works included Irupatham Noottandinte Ithihasam (English: Epic of the 20th century), Balidarshanam (English: The vision of Bali), and Nimisha Kshetram (English: Holy moment).

Akkitham started his career as an editor of Unni Namboothiri magazine, which he used as a platform for his social activities. He also worked as an assistant editor at Mangalodayam and Yogakshemam magazines. In 1956, he joined the Kozhikode station of the All India Radio (AIR) where he served until 1975 after which he was transferred to the Thrissur station of the AIR. He was also associated with Anaadi, a literary initiative for popularising studies of Vedas.

His literary works began to gain wide attention in the early 1950s and Irupatham Noottandinte Ithihasam (English: Epic of the 20th Century), a khandakavya is one of the first truly modernist poems in Malayalam literature, the book also won the Sanjayan Award in 1952.[8] He published around 45 books comprising poetry anthologies, plays and short stories. Balidarsanam (English: The Vision of Bali), Arangettam, Nimisha Kshetram, Idinju Polinja Lokam, Amritaghatika, and Kalikkottilil are some of his notable poetry anthologies. Upanayanam and Samavarttanam, two collections of essays, feature among the writings in prose. Sree Mahabhagavatham, his translation of Srimad Bhagavatam, composed of 14,613 verses, covers over 2,400 pages.[8]Some of the themes that Akkitham explored in his works included love and compassion. He is acknowledged to have introduced 'meaningful modernism' as a central theme in his poetry.

Akkitham was involved in social reform activities and through his association with Yogakshema Sabha, he strived to bring in reforms in the lives of the Namboothiri Brahmins of Kerala. He was associated with various centres in Thirunavaya, Kadavallur and Thrissur, for the promotion of vedic studies. He was also associated with the Paliyam Sathyagraha, a peaceful protest against untouchability in 1947.

Awards and honours
Akkitham received the Sanjayan Award in 1952, for his work, Irupatham Noottandinte Ithihasam and the Kerala Sahitya Akademi Award for Poetry in 1971 for Balidarshanam. He received two major honours in 1973, the Sahitya Akademi Award for Balidarshanam and the Odakkuzhal Award for Nimisha Kshetram. He was selected for the Asan Smaraka Kavitha Puraskaram in 1994 and, two years later, for the 1996 Lalithambika Antharjanam Smaraka Sahitya Award, followed by the Vallathol Award in 1997.

The next major honour for Akkitham came by way of Vayalar Award which he received in 2012. The Government of Kerala awarded him Ezhuthachan Puraskaram, their highest literary award in 2016. He received Padma Shri, the fourth highest civilian award of the Government of India in 2017. He could not attend the investiture ceremony due to ill health and the award was later handed over to him by the district collector of Palakkad. He received the Jnanpith Award, the highest Indian literary award, in 2019. Reflecting on his lifetime contribution to Malayalam literature, the Jnanpith Award citation specifically noted him as “A poet of rare integrity" and noted that his poetry reflected "unfathomable compassion, imprints of Indian philosophical and moral values and a bridge between tradition and modernity, and delved deep into human emotions in a fast changing social space.”

He was also a recipient of several other honours such as Krishna Geedhi Award, Nalappad Award, Puthezhan Award, Moorti Devi Award of Bharatiya Jnanpith and Amrita Keerti Puraskar (2004). Arikil Akkitham is a documentary film directed by E. Suresh, which details the life of the poet from the perspective of his daughter, Sreeja.

Personal life
Akkitham was married to Sreedevi Antharjanam and the couple had sons: Narayanan, Vasudevan and daughters: Sreeja, Indira, Parvathy and Leela. The family lives in Amettikkara.Sreedevi Antharjanam, the wife of Akkitham, died on 13 March 2019, aged 85. Noted painter Akkitham Narayanan is his younger brother.

He died on 15 October 2020, aged 94 in West Fort Hi-Tech Hospital in Thrissur. It was announced that his funeral would take place with state honours in Kumaranellur, in Kerala.