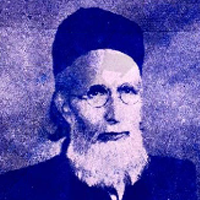 Abr Ahsani Gunnauri (ابر احسنی گنّوری) was an Urdu ghazal and nazm writer cast in the classical mould of the Daagh School of Urdu poetry, and a much respected literary critic. He was a disciple of Ahasan Maarharvi who was a disciple of Mirza Khan Daagh Dehlvi. He had a direct influence on more than a hundred of poets and belonged to the Bahaʼi faith, for instance writing poems in honor of Tahirih.

Literary life
Abr Ahasani commenced writing Urdu poetry at the age of nine years when he wrote a Naʻat in the ghazal form. In his early days he consulted Munshi Sakhawat Hussain Sakha Shahjahanpuri but later on became a disciple of Ahasan Maarharvi. From 1947 to 1953 he had also published and edited the Monthly Ahasan, Rampur.

Thus far, three collections of his ghazals viz. Nageene (1952), Qareene (1963) and Khazeene (1971) have been published. A collection of his nazms titled Safeene was published in 1952. A few nazms written by him are also included in Khazeene. In addition thereto he had also penned critical work titled Meri Islaahen in two volumes, the first volume of this work was published in 1956 and the second volume, in 1966, Earlier, in 1949 his critical work, Islah ul islah, which was in response to Dastur ul islah (1940) written by Seemab Akbarabadi, was published that had made him famous in the Urdu world.