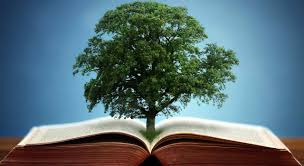 The book of nature | Letters from father to daughter

The book of nature, excerpts: you know of course that our Earth is very old - millions and millions of years old. You read in history books but in old times when men did not exist surely no books could have been written. How then can we find out what happened then? We cannot merely sit down and imagine everything. This would be very interesting for we could imagine anything we wanted to and would thus make up the most beautiful fairy tales. But this does not need to be true as it would not be based on any fact that we had seen. But although we have no books written in those far off days, fortunately we have some things which tell us a great deal as well almost as a book would. We have rocks and mountains and seas and stars and rivers and deserts and fossils of old animals. These and other light things are our books for the earth's early story.

The real way to understand the story is not merely to read about it in other people's books but to go to the great Book of nature itself. You will, I hope, soon begin to learn how to read the story from the rocks and mountains. Imagine how fascinating it is! Every little stone that you see lying in the road or on the mountain side may be a little page in the nature's book and maybe able to tell you something if you only knew how to read it. To be able to read any language Hindi or Urdu or English you have to learn its alphabet. Thor also you must learn the alphabet of nature before you can read her story in her books of stone and rock. Even now perhaps you know a little how to read this. If you see a little round shiny pebble does it not tell you something? How did it get round and smooth and shiny without any corners or rough edges? If you break a rock into small bits each bit is rough and has corners and rough edges. It is not at all like a round smooth pebble how did then the pebble become so round and smooth and shiny? It will tell you its story if you have good eyes to see and ears to hear it. It tells you that once upon a time it may be long ago, it was a bit of a rock, just like the bit you may break from a big rock or stone with plenty of edges and corners. Probably it rested on some mountain side. Then came the rain and washed it down to the little valley where it found a mountain stream which pushed it on and on till it reached a little river. And the Little river took it to the bigger river. And all the violet road at the bottom of the river and it's edges were worn away and it's ro

ugh surface smooth and shiny. So it became the pebble that you see. If the river had carried it on, it would have become smaller and smaller till at last it became a grain of sand and joined its brothers at the seaside to make a beautiful beach where little children can play and make classes out of the sand. If a little people can teach you so much how much more could we learn from all the rocks and mountains and the many other things we see around us?

A little excerpt from the book: Letters from father to daughter, a book by former prime minister pandit JawaharLal Nehru which is a compilation of his letters that he wrote from Allahabad to his daughter Indira living in Mussoorie. We’ve always been taught in science, the different aspects of nature, our surroundings and our environment. And like an ideal father, Jawaharlal Nehru too taught her daughter many things about the environment. Many of his letters are centred on the subjects of environment and the making of earth. How it all began and how it all originated. The pen used to write about the book of nature makes you learn and the use of words has the power to teach you about the beauty and essence of nature. It was him who taught her the value of the book of nature and mentions that every part of nature tells the story. Taking up on this, we must, too, learn about the environment. We must, too, try and read each chapter that it tells us so that we can take care of it, so that we know it. After all, it’s what makes us alive. It is the essence of our existence.

Kavishala wishes you a happy environment day and urges you to take a different look on nature.