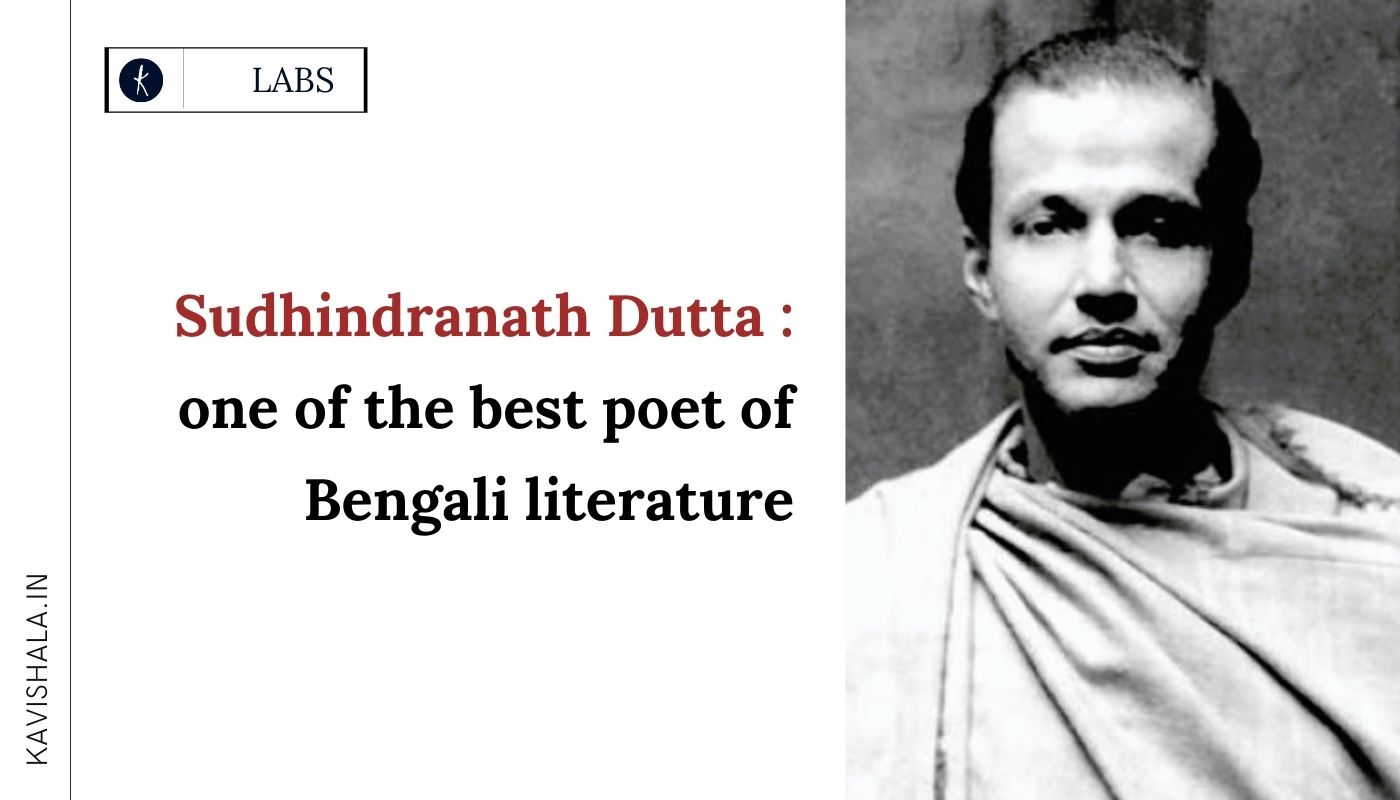 Sudhindranath Dutta : one of the best poet of Bengali literature

Sudhindranath Dutta a post-modern poet and journalist, was born on 30 October 1901 at Hatibagan in Kolkata. His father, Hirendranath Dutta, was a philosopher while his second wife, Rajeswari Basudev, was a noted singer.

Sudhindranath studied at the Theosophical High School in Benares and at the Oriental Seminary in Kolkata from where he matriculated . After passing Intermediate Arts and Bachelor of Arts from the Scottish Church College, he enrolled in the MA in English at Calcutta. He edited a magazine called Parichay for twelve years.

Sudhindranath Dutta believed that hard work is what is needed for creating art, and the embattled nature of his poetry contrasted with that of the romantic poetry of Jibananand Das. When Jibananand Das's poetry notebooks were printed, Dutt commented after seeing the great number of corrections and deletions in the notebooks

Sudhindranath published several volumes of poetry, among them Tanvi , Orchestra , Krandasi , Uttar Falguni , Sangvarta , Pratidhvani , Daxhami . He also wrote essays, some of which were published in Svagata and Kulay O Kalpurus . He also published a volume of his translations called Pratidhvani.

Some of his creations :-

If I never return to earth

I shall walk down this lane once more

And see the gateway in the delicate sunshine

And by its side the scarlet iris;

The closely tended flowers, the yellow and fresh blue

There, and the deep green carpet of the grass will rest my eyes.

Whose house, who lives there, these I shall not know -—

But the eager pain of springtime in the farer's lonely breast,

Will fill, in the restful quiet that trembles with the piano

My eyes with joy for a passing moment.

On days of rain I still remember her

As soon as local green is overcast

With common grey, she comes, an image sharp

In outline only, lighted symbol-wise

By fitful flares of memory, just before

The curtain falls, and instantly, the show

And seer transfusing, I forget my years,

My forty years and more...

Explanation : The poet says that, if I will never return to earth or say that I will die. Even then I will be able to walk in these streets. I can see red, yellow, blue flowers. The carpet of grass will cool my eyes. If anyone lives in these houses, I don't know. But, when the anxious pain of spring will disturb the silence of a distant place. So it's as if someone is playing the piano. This moment will pass through my eyes. During the rainy days there will be a cloud cover. An image, under the guise of light, igniting the flames of my memory. The curtain appears, just before it falls. And I will forget my 40 years of life again.

This gloomy day of rain I spent in reverie.

Throwing ajar the gates of my heart,

I made an easy passage for memories.

With sightless eyes I saw

Another day like this, framed in the curving sky;

In the rain's endless lamentation

Heard the tender greeting of that voice.

The fury of the storm as it pressed upon the shutters

Echoed the impotent rage of my ruined heart

Against a harsh, indifferent, silent God.

suddenly flashed The signal for extinction.

And then darkness spread

Within, without, its winding sheet.

No hope, it seemed,

No words to tell of this caged defeat.

It seemed that Death was closing in,

Narrowing its circles in slow manouevres.

Putrid crumbs I had stored through all my years

In my miser's coffers.

But now the game was up,

And soon the cleansing blade will fall

Explanation : The poet says that when it rains. That day makes him sad. Still, he narrates the day with all his heart. Opening the door of your heart, makes way for memories. The soft voice of the endless cries of rain is heard. For a harsh but sad God, the utterly indignant echo that erupts in my heart is a useless race. In the evening the rain stops like the flame of the sun dies in the evening. The darkness, indicating the disappearance with the last attempt at life, has spread. There is no hope, death is approaching in slow steps. The executioner of death has come with his sharp blade. Now the game will end. Now all my poverty will end.