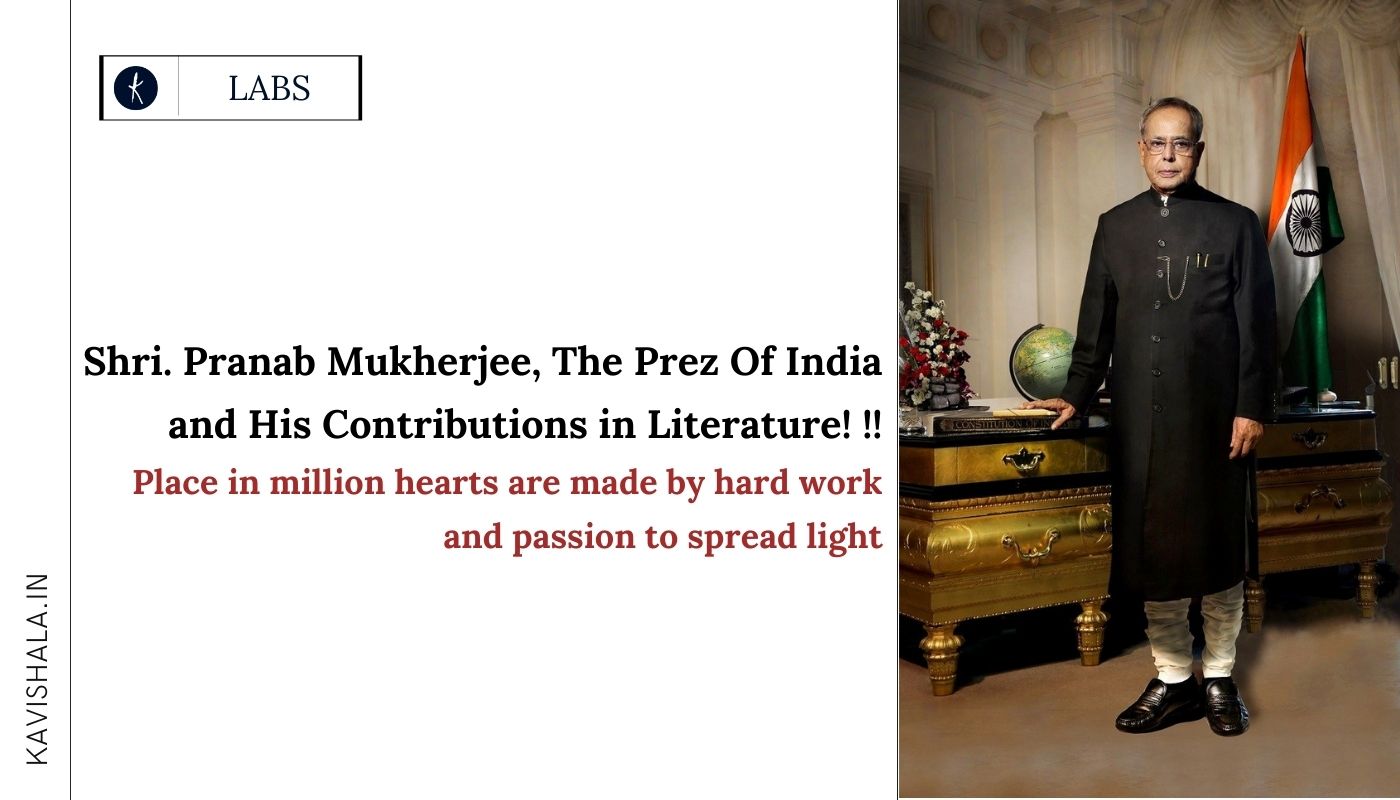 Shri. Pranab Mukherjee, The Prez Of India and His Contributions in Literature!

Shri Pranab Mukherjee’s last book before death reflects how Congress failed to see the end of its extraordinary leadership and inspires Indian Politics.

Being glamorous is about strength and confidence.

It's black and white - dramatic.

You have to be strong.

To conquer the World!

In his last book, former President of India Shri Pranab Mukherjee Ji has said criticized Congress’s failure to see the end of its once charismatic leadership that led to the 2014 Lok Sabha election defeat with Prime Minister Narendra Modi sweeping the polls. Pranab Mukherjee also talks about demonetization and the suddenness of it along with the many failures of Congress in his last book on the Presidential years.

In ‘The Presidential Years, 2012-2017’, Pranab Mukherjee talks about seeing a lack of extraordinary leaders that reduced the establishment to a "government of averages".

Pranab Mukherjee, who passed away in 2020 after surgery and Covid-19 complications, wrote the last book before his death. The book was released on Tuesday.

Pranab Mukherjee had also written that PM Narendra Modi had not discussed the demonetization before its announcement on the 8th of Nov, 2016, but the move did not surprise him as such drastic steps need “suddenness”.

In his book, Pranab Mukherjee also talks about the day of the results of the 2014 Lok Sabha elections when he had asked his aide to keep him informed of the trends every half an hour. When the results were announced in the evening, Pranab said he was "greatly relieved over the decisive mandate but also disappointed at my one-time party's performance".

KAVISHALA PRESENTS A SPEECH BY THE LATE PRESIDENT OF INDIA, SHRI PRANAB MUKHERJEE ON THE OCCASION OF THE PRESENTATION OF THE 49TH JNANPITH AWARD

"It is indeed a pleasure for me to present amidst you today on the happy occasion of the presentation of the 49thJnanpith award to the eminent Hindi poet, Dr. Kedarnath Singh, for his outstanding contribution towards Indian literature. I congratulate him on winning this coveted award. I am sure he will continue to enrich Hindi literature in the years to come.

The philanthropist couple, Sahu Shanti Prasad Jain and Late Smt. Rama Jain, were the pioneers of the Bharatiya Jnanpith, initiating and then institutionalizing this noble endeavor of recognizing and awarding Indian authors for their contribution to Indian literature. It was indeed a significant and welcome step in shaping our country’s literary map. I congratulate Bharatiya Jnanpith and its trustees for working tirelessly towards translating the dreams of its illustrious founders into reality.

I am delighted to know that for the last seven decades the Bharatiya Jnanpith is encouraging works of original modern literature in Hindi, besides publishing Hindi translations of works of eminent writers of various Indian languages. They have published more than a thousand books to date, admired by readers across all strata of society. The Bharatiya Jnanpith has creditably brought many regional languages and their authors to the forefront and has awarded them for their contributions to enriching Indian literature. It is indeed an act of commendable praise and I congratulate them for working for national integration through literary endeavors.

India is a country of many languages and we celebrate our linguistic diversity by creating some magnificent works each year which contribute to our literary heritage. The endeavor now has to be to spread the beauty, depth, and resonance of our literary mosaic to all corners of the world. I urge this distinguished gathering to work tirelessly towards this mission.

The highest number of awardees from all Indian languages come from Hindi and Dr. Kedarnath Singh has, through this recognition, joined the pantheon of outstanding litterateurs like Pant, Dinkar, Ajneya, Mahadevi, Naresh Mehta, Nirmal Verma, Kunwar Narain, Shrilal Shukl, and Amarkant.

Dr. Kedarnath Singh, through his poetry, has offered us rare assimilation of rhymes and lyrical prose, exploring both the realms of reality and fantasy with equal felicity. His poetry presents a collage of meaning, colors, and acceptance. A poet of unique stature, his approach is not only sensitive to modern aesthetics but also to traditional rural communities while at all times being committed to the celebration called life.

Dr. Singh is a celebrated teacher as well who has taught at JNU, one of the premier institutions of learning in India. I am delighted that a visionary and a poet like him has had the benefit of countless young minds as a canvas. I am sure a lot many of his students, having gained from his experience and insights, will contribute in various ways to enriching our national life and heritage.

It is my fond wish that our younger generation delves deep into Indian classics. This will not only help in resetting the moral compass but would also go a long way in contributing to our efforts at nation-building. I am sure that the Bharatiya Jnanpith will adequately work out ways of exposing our youth to the brilliance of our literature.

I once again congratulate Dr. Kedarnath Singh on being presented with the Jnanpith award and wish him many more years of creative excellence.

Here's a poem to reveal his dedication to the motherland :

Democracy has always proved the fact -

The better man does win the voters' hearts;

To Rashtrapathi Bhavan in great style;

An elderly man with great energy!

The congressman is now first citizen!

A man with many feathers in his cap!

A glorious peak for a politician!

A great reward for one with immense grit;

An adorable Indian with fine wit!

May he live long and reign God-willingly!

May he fulfill the Indians' cherished dreams!

May he make India powerful and great!

This is the journey of a Legend that has the power of pen and humanity.