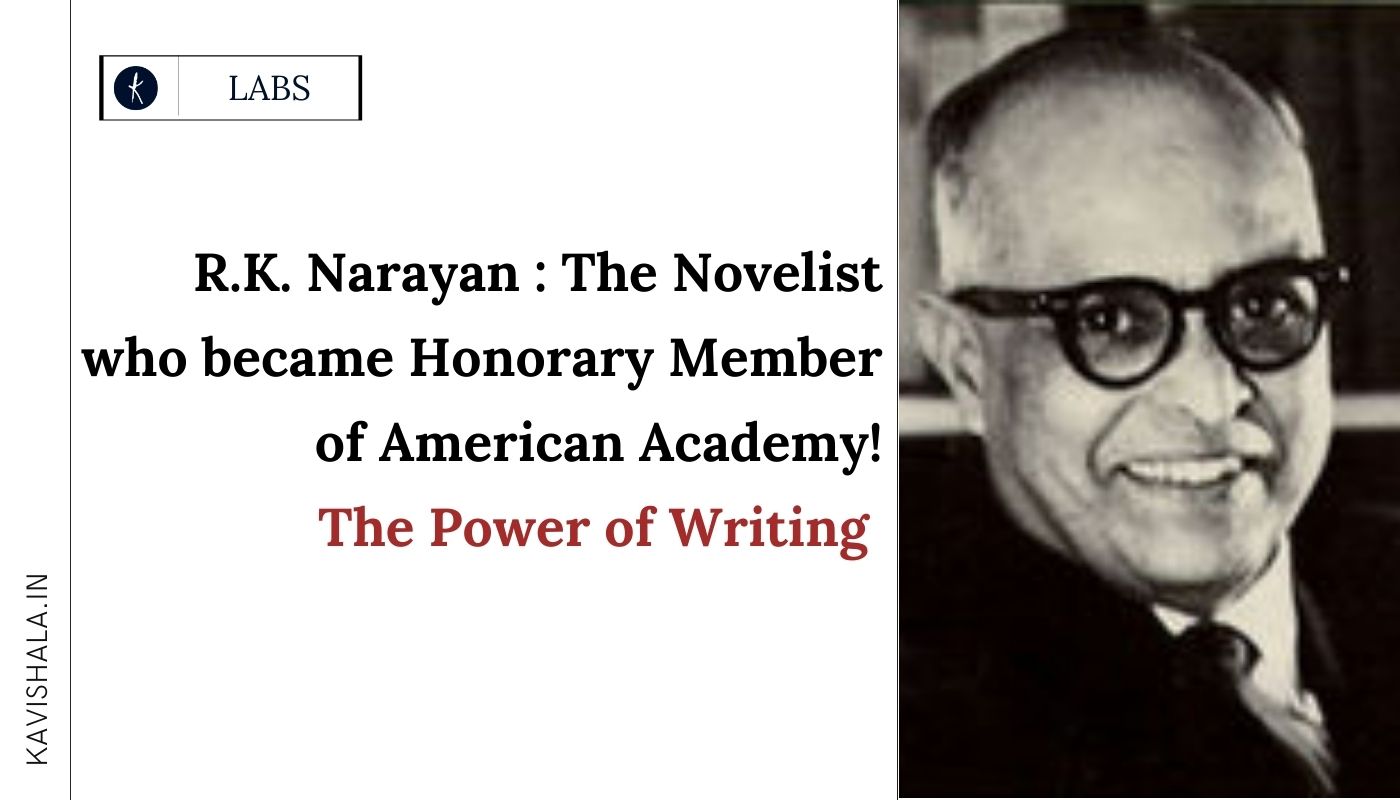 “ The difference between a simpleton and an intelligent man,

according to the man who is convinced that he is of the latter category,

is that the former wholeheartedly accept all things that he sees and hears while the latter never admit anything except after most searching scrutiny.

He imagines his intelligence to be a sieve of closely woven mesh through which nothing but the finest can pass. ”

Having been born and raised in Madras, in 1906, he was educated there at Maharaja's College. In 1958 R.K. Narayan's work The Guide won him the National Prize of the Indian Literary Academy, the country's highest literary honor. Thus, R. K. Narayan became the most widely known Indian English Novelists.

Let's recite the most adorable poem ‘Malgudi’ to remember R K Narayan, the creator of India’s most loveable town of all time -

I have come to Malgudi –

but Malgudi does not fluctuate.

It is what and where

it always has been,

It flows as it has always flowed –

and has not changed course.

but Mempi Forest – guess what –

it hasn’t moved an inch,

not to Chennai or Mumbai.

all needs are fulfilled in Malgudi.

will Raju not earnestly pray

for the first drop to fall?

someone will be waiting,

why, if they pass muster

one can read them to the long-suffering pupils

or give them first to Srinivas

Should I need oil

is Elliman Street not home

What if I get bored?

I can gaze at that statue again –

where only the most exquisite gossip is exchanged:

a certain gentleman of Kabir Street

cuckolded again – for the third time.

Pop up to the station

and see who’s getting off the train.

So what if I stare!

In Malgudi, it’s not rude to stare.

A stray dog without a name

lies down beside its weary shadow.

to the river for ablutions:

Jingle of ox-bells, carts on their way to market.

Ah! I have come to Malgudi.

What better than an earful of good words from Dr. Raman!

If more good news is needed

Surely postman Thannappa will bring it.

A poet is recreating the life of Krishna

“Girls with girls did dance in trance –”

surely he will become my dearest friend!

Some people say, “It has changed.”

No! The way ‘some people’ see it has changed

but that’s people for you, not Malgudi!

Malgudi does not change,

it does not expand anymore

I could not live anywhere else. No.

I have come at last to Malgudi!

Do you take me for a crazed one,

Idiot of the Month?

I know full well it does not exist.

But I have news for you:

neither does Rome, Cork

I mean to say, really!

I am here and not here

I have reached the unreachable:

I have come at last to Malgudi.

Along with writing top novels, Narayan has authored almost 5 collections of short stories, including A Horse and Two Goats, Malgudi Days, and Under the Banyan Tree including 2 travel books and 2 volumes of essays, 1 volume of memoirs, and the re-told legends Gods and Demons.

Early in the year 1980, he has been awarded the A.C. Benson Medal by the Royal Society of Literature.

Whereas in 1982 he was made an Honorary Member of the American Academy and Institute of Arts and Letters.

Most of his work, beginning with his very first novel Swami and Friends (1935), captures many Indian traits while retaining a unique identity of its own. His Novels and stories were grounded in a compassionate humanism and nurtured the humor and energy of ordinary human life.

R.K. Narayan lived among us till the age of 94 but unfortunately died in 2001. He had written for more than 50 years and published Noveld until he was 87 years old. He titled 14 novels, 5 volumes of short stories, a number of travelogues, and collections of non-fiction, wrapping up with the condensed versions of Indian epics and the memoir My Days.