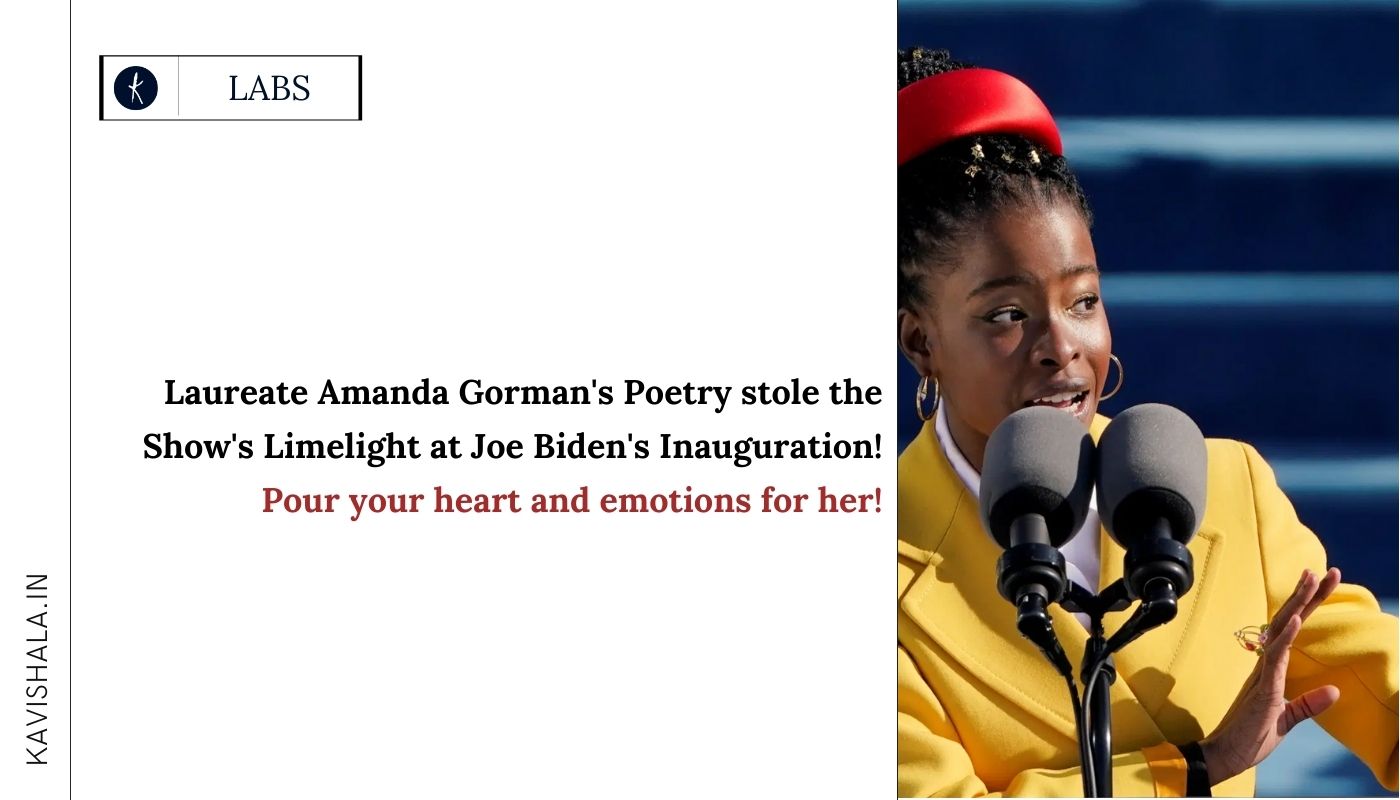 Amanda Gorman's Poem is up here to steal the hearts of our Readers....

The Prestigious National Youth and Poet Laureate recited "The Hill We Climb," at Joe Biden's inauguration which she finished after espying the siege on the US Capitol.

“Poetry isn’t an island, it's a bridge.

Poetry isn’t a ship, it's our lifeboat.

Poetry isn’t swimming coz it is water.”

During those beautiful 6 minutes that belonged to 22 years old Black poet Amanda Gorman from Los Angeles, had become America's remember most vividly remembered moment during Joe Biden’s inauguration as US president on Jan 20.

Gorman’s presentation of her work “The Hill We Climb” was prolifically showstopper, and her performance was as powerful and transformative as her pure verses.

To your surprise President Joe Biden and Vice President Kamala Harris's inauguration ceremony was a star-studded affair, with the million likes of Lady Gaga and Jennifier Lopez stepping up to the mic and stunning the ceremony. But amidst such fanfare, a relatively young figure managed to shine in the show :  Amanda Gorman, The National Youth Poet Laureate and she was also the youngest inaugural poet in the U.S. history ever before.

Amanda had finished the poem, titled "The Hill We Climb," the night after pro-Trump rioters sieged the Capitol building earlier this month.She said, “In my poem, I’m not going to in any way gloss over what we’ve seen over the past few weeks and, dare I say, the past few years."

"But what I really aspire to do in the poem is to be able to use my words to envision a way in which our country can still come together and can still heal,” she explained .

“It’s doing that in a way that is not erasing or neglecting the harsh truths I think America needs to reconcile with.”Gorman has explained that she finished the work late at night on Jan. 6, the special day of the violent insurrection at the US Capitol. She references the darkness and trials the country has recently endured, writing of “a force that would shatter our nation rather than share it, would destroy our country if it meant delaying democracy” and “nearly succeeded.”In the vote of thanks, she narrates that “the light that is always there, if only we’re brave enough to see it. If only we’re brave enough to be it.”

“The Hill We Climb” Recited by Amanda Gorman -

When day comes we ask ourselves,

where can we find light in this never-ending shade?

The loss we carry,

a sea we must wade.

We've braved the belly of the beast,

and the norms and notions

of what just is

And yet the dawn is ours

before we knew it.

Somehow we do it.

a nation that isn't broken,

We the successors of a country and a time

where a skinny Black girl

descended from slaves and raised by a single mother

can dream of becoming president

only to find herself reciting for one.

And yes we are far from polished.

But that doesn't mean we are

striving to form a union that is perfect.

We are striving to forge a union with purpose,

to compose a country committed to all cultures, colors, characters and

And so we lift our gazes not to what stands between us,

but what stands before us.

We close the divide because we know, to put our future first,

we must first put our differences aside.

We lay down our arms

so we can reach out our arms

We seek harm to none and harmony for all.

Let the globe, if nothing else, say this is true,

that even as we grieved, we grew,

that even as we hurt, we hoped,

that even as we tired, we tried,

that we'll forever be tied together, victorious.

Not because we will never again know defeat,

but because we will never again sow division.

Scripture tells us to envision

that everyone shall sit under their own vine and fig tree

and no one shall make them afraid.

If we're to live up to our own time,

then victory won't lie in the blade.

But in all the bridges we've made,

that is the promise to glade,

the hill we climb.

If only we dare.

It's because being American is more than a pride we inherit,

it's the past we step into

and how we repair it.

We've seen a force that would shatter our nation

Would destroy our country if it meant delaying democracy.

And this effort very nearly succeeded.

But while democracy can be periodically delayed,

it can never be permanently defeated.

in this faith we trust.

For while we have our eyes on the future,

history has its eyes on us.

This is the era of just redemption

we feared at its inception.

We did not feel prepared to be the heirs

of such a terrifying hour

but within it we found the power

to author a new chapter.

To offer hope and laughter to ourselves.

So while once we asked,

how could we possibly prevail over catastrophe?

How could catastrophe possibly prevail over us?

We will not march back to what was,

but move to what shall be.

A country that is bruised but whole,

We will not be turned around

or interrupted by intimidation,

because we know our inaction and inertia

will be the inheritance of the next generation.

Our blunders become their burdens.

But one thing is certain,

then love becomes our legacy,

and change our children's birthright.

So let us leave behind a country

better than the one we were left with.

Every breath from my bronze-pounded chest,

we will raise this wounded world into a wondrous one.

We will rise from the gold-limbed hills of the west.

We will rise from the windswept northeast,

where our forefathers first realized revolution.

We will rise from the lake-rimmed cities of the midwestern states.

We will rise from the sunbaked south.

We will rebuild, reconcile and recover.

And every known nook of our nation and

every corner called our country,

our people diverse and beautiful will emerge,

When day comes we step out of the shade,

the new dawn blooms as we free it.

For there is always light

if only we're brave enough to see it.

if only we're brave enough to be it.

These lines truly bring tears in our eyes and a shine of hope for overcoming the darkness and trials that the country has faced, focusing more into the force that would shatter America rather than sharing it,would destroy the country if it meant delaying democracy and they are nearly succeeded.But, later on she added up saying as ode to America's resilience and a call to summon it forever.In the final she mentioned that why she says that "the light that is always there ,if we're brave enough to see it.If only we're brave enough to be in it".Her sayings touched the hearts of everyone present there and brought a positive attitude to fight with circumstances and move on the path that we feel we are looking for :)