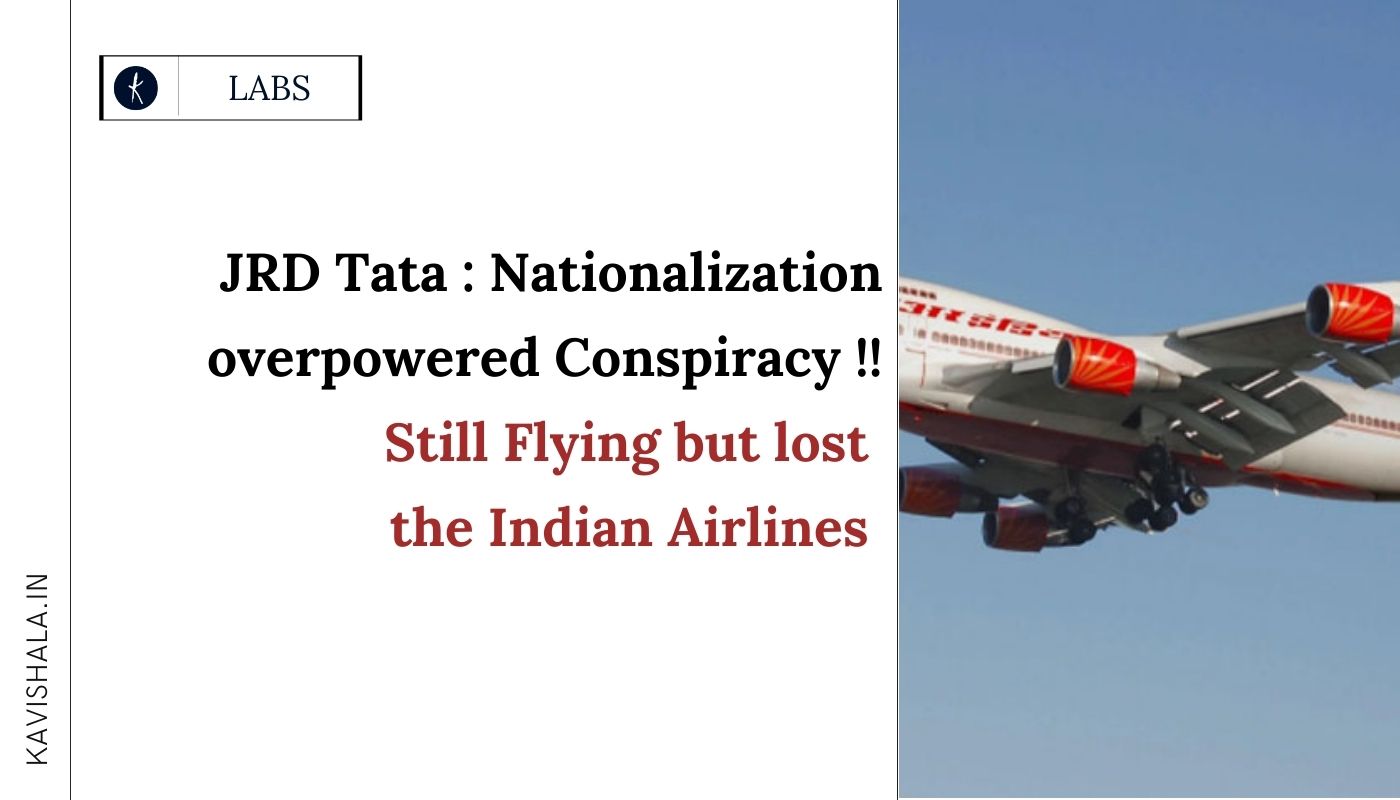 The Govt. had taken away Air India from the shrewd Indian Aviator and a wonderful Industrialist Jehangir Ratanji Dadabhoy Tata who was also the chairman of Tata Group, however, the govt. had asked him to run it, and then took it away again.

Since, Independence the Nationalization was really a hotly debated topic. JRD Tata opposed it on several platforms but wasn’t invited by the govt. to present his views on it. On the other hand Communications Minister Jagjivan Ram, had supervised modalities of nationalization, and consult JRD for the same,but JRD was disheartened.

In Nov,1952 during a meeting with the Prime Minister Pt. Jawaharlal Nehru , the govt. had intentionally treated the Tatas group shabbily and as it was considered as a planned conspiracy to suppress private civil aviation, particularly with the Tatas’ air services.

Nehru reassured him of no such intentions. In fact, in a personal letter to JRD, he placed on record the high appreciation he had for the Tatas, who had pioneered several projects and the excellent services rendered by Air India International.

In his reply, JRD expressed his disappointment at the government’s decision to proceed with such a major step without any consultations with the Tatas, who were pioneers in Indian civil aviation.

It is said that the govt. maintained the decorum of nationalization that would bring order to the industry and that the Congress Party had the policy to nationalize all modes of transport for almost 2 decades.

Eventually as planned it would take approximately 6 decades to reveal whose viewpoint stood according to the test of time. This is the major drawback and has legitimately impacted the relationship between India’s first prime minister and the greatest leader of India’s largest business house.

The tough pioneer and entrepreneur by heart JRD managed the carrier’s operational aspects with a different perspective on a whole. He took great personal care of passengers, even when flying as a passenger himself on the same plane.

Greatly influenced by his expertise, the govt. asked JRD to lead Air India and Indian Airlines as the Chairman. After protracted conversations at Tata Sons, JRD accepted the chairmanship of Air India and a directorship with the board of Indian Airlines. Particularly concerned that the high standards of Air India International should not be adversely affected by nationalization JRD took the decision on priority.

His valuable words at the end of Air India’s first annual general meeting seemed prophetic, “...Unless the greatest attention continues to be paid to the high standards of training and discipline amongst flying and ground crews, the resulting deterioration might destroy the good name of Indian civil aviation.” Over the next 25 years, through personal commitment, he had maintained high standards of services at Air India, which enhanced an impactful reputation among the traveling passengers.

For so many years Air India had set the milestone and has been the inspiration for East Asian carriers such as Cathay Pacific and Thai Airways that began to dominate the skies in the era of 1970s. Nonetheless, JRD had massively inspired employees to consistently delight customers through safety and service excellence. “When your excellence comes from the top, it becomes the ethos of the organization,” proclaimed Bakul Khote, the member of the customer service department at Air India. Forsakenly , JRD even admitted that during the vital years of his chairmanship at Tata Sons, he was effectually dedicating nearly 50% of his time to Air India, an entity that provided no financial rewards to him or his other companies.

He epitomized his oft-quoted advice, “Always aim at perfection for only then will you achieve excellence.”

Major Tragedies of its time :

But the time has another thing to reward him with the greatest air tragedies of its fate, the indigenous fall was attributed to pilot error. A month later, the Prime Minister Morarji Desai-led government took off JRD from the position of chairmanship at Air India as well as the directorship of Indian Airlines.