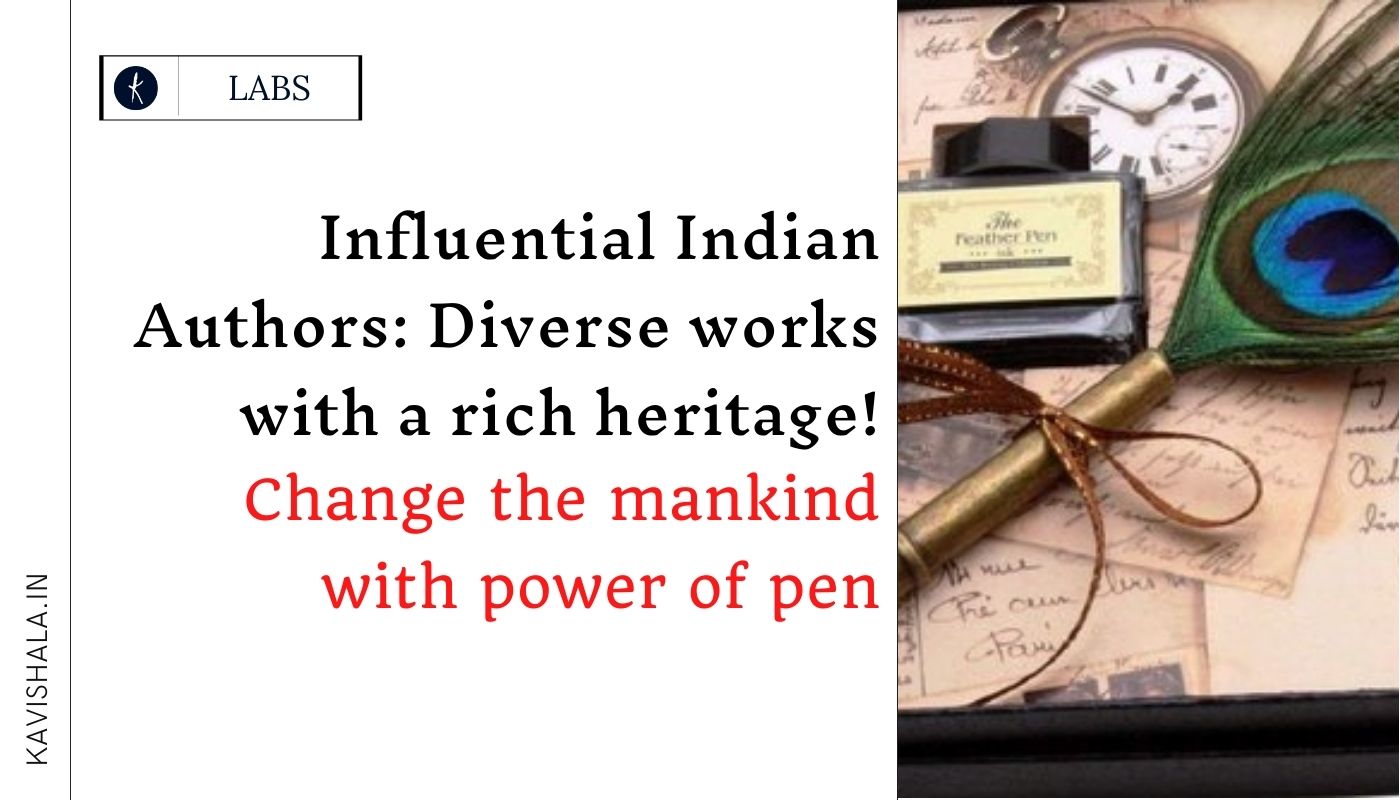 I wish that the Indians believed me a god,

for upon the report of an enemy's valor

oftentimes depends on the success of a battle,

and false reports have many times done as

We all know that our country is a diverse land with a rich heritage and a wide literary history. Nonetheless, our country is a melting pot of varied cultures, traditions, languages, foods, and a lot more.

Literature is a prolific part of Indian history all over the world, and India is among the top in rich culture and customs in this regard. Counting right from Vishnu Sharma to Chanakya, India has encountered countless famed Indian authors writing effective books for the masses.

In this article, Kavishala is going to shed some light on a few of the most famous and acknowledged Indian authors as well as their books that touched the heart and conscience of the population at that time and still continue to do so today.

His most popular work that is considered as a revolution in the industry is Kamasutra, even though the author’s name is not known as much to most people. But it is readable and easy to understand. This novel is famous not just in India but across the entire world.

The readers have actually explained that nothing has managed to move them to date as much as the texts in this book impacted their life.

However, on the contrary, it is a book that every individual, regardless of gender, should be aware of. If approached appropriately, this book has the power to change many lives and the thinking processes of millions of individuals.

“By plucking her petals,

you do not gather the beauty of the flower.”

Kalidasa has authored Meghdoot which is one of the best and most recognized works of Kalidasa, although he is regarded as one of the greatest ancient Sanskrit poets who ever lived. This book Meghdoot is originally a lyrical poem in the form of a book that is divided into 111 stanzas hierarchically.

The text itself is split into 2 broad parts named Purva-Megha and Uttara-Megha.

The essence of poetry is considered to have great literary value and has even been translated into many languages. The first translation was carried out in 1813 by Horace Hayman Wilson in the English language.

Many of us have observed the somewhat controversial yet self-moving film Padmavat starring the superstars like Deepika Padukone, Shahid Kapoor, and Ranvir Singh, we can realize the power behind the story of this script written in such a lucid manner. The book is a better reflection of what message the author wants to convey. Basically, the author was a pir and Sufi poet. He had mainly written the script of Persian Nastaʿlīq and mostly in the Awadhi language.

The once and foremost written epic poem named Padmavat can definitely be referred to as his most inspirational work. This poem expresses the journey of a beautiful and strong woman named Padmavati, who travels against adversities to achieve significant tasks of strength and valor.

Kids-lovable and the tales are based on deep morals. Panchatantra is a fascinating Indian book for children as well as adults. It is a wide collection of Indian fables that have survived to date. Also, the famous Hindu scholar named Pandit Vishu Sharma of 200 BC wrote these stories.

This book falls into the brisk category of “Niti Shastra,” which literally means a text that gives lessons on wise moral and social conduct.

Each and every story of this book has a moral and philosophical foundation, so it is perfect to teach children some essential life values. It has stories relating to animals and the jungle but can teach a lot about living a fruitful life as a good human being.

There is much more to it than politics and includes things such as market, trade, economics, ethics, criminal and civil courts, law, government, and various other things. It also sheds light on diplomacy, nature of peace, war theories, duties of a king, etc.

Kautilya had written the most epic pieces in his life which distinguishes him from the other writers. The must-readable book Arthashastra by Kautilya holds a lot of relevance even today. Although, it is an excellent treatise that conveys all about military strategy, statecraft, economic policy. The attractive title Arthashastra is often literally translated to be the “art of politics.” However, in reality, the scope of this book is extensive.

Vibrant ethics and social welfare are also important aspects of such books. It has been one of the most influential books in Indian history that are still significant today. The higher studies pursuing students of politics, international diplomacy, and economics study it in their universities today. One can always read this book to learn a few things about strategy. Well, it is super helpful for almost everyone.

Strings of Devotion in Literature

And this is the ultimate spice-up tip of the iceberg when it comes to celebrating renowned Indian authors' achievements. Adding up to the list are many more famous names such as Banabhatta, Shudraka, and Chand Bardai, who have intensively contributed some fantastic literary pieces to the world of literature.

Hence, if an individual is an avid reader and checks out some authentic works of Indian authors, these are some classics and must-haves in their collection. Going through these books can genuinely enhance one's treasure of knowledge.