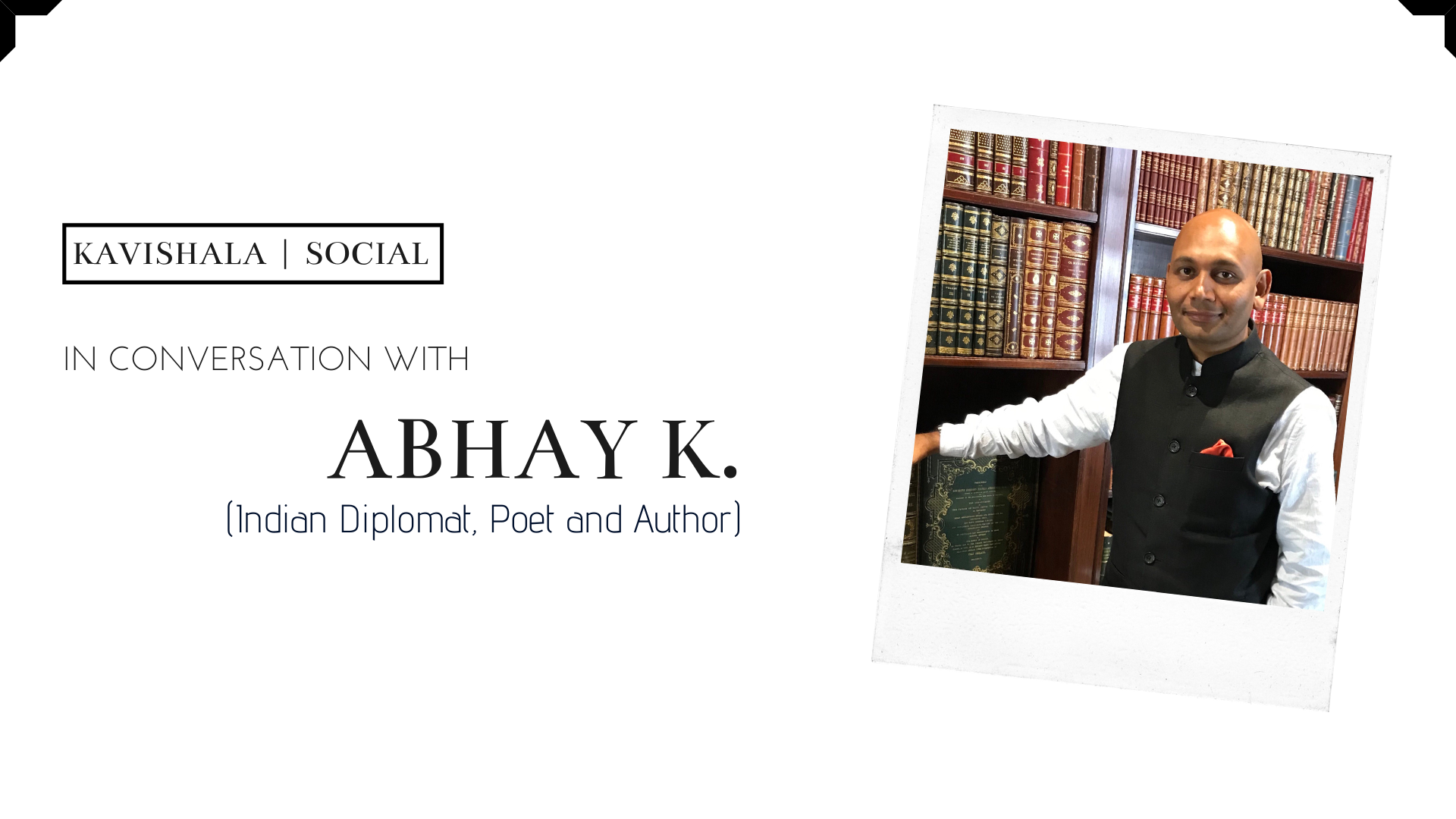 In Conversation with Indian Diplomat, Poet and Author Abhay K.

Abhay K. is an Indian poet-diplomat and the author of 8 poetry collections and the editor of The Bloomsbury Anthology of Great Indian Poems. He has translated Kalidasa’s Meghaduta into English. His forthcoming poetry collection is The Alphabets of Latin America. His Earth Anthem has been translated into over 50 languages.

Kavishala is going behind the scenes to uncover the inspirations and secrets of Abhay K.:

1. Tell us about your childhood. Where you grew up and how was life there ? What were your hobbies, your aspirations and guidance ?

Abhay K. - I grew up in a village called Chhabilapur near the ancient city of Rajgir, in Nalanda district of Bihar. I very fondly remember visiting my grandparents and uncles and aunts in a remote village named Bhattu Bigha, where I had to go walking and had to cross the river Paimar to reach there. I loved going there as the place was full of fruit trees—guavas, ber, mangoes, papaya among others, and sugarcane fields, all kind of vegetables grew there, a gobar-gas plant in those days, and lots of birds including parrots. Above all this my grandma used to tell me stories at night. It was my garden of Eden, from which I have been banished, and I am ever searching for it wherever I am in this world.

Then when I was in class five or six, I shifted to a boarding school in Rajgir, where I continued studying till class 10th. Those days I loved watching Hindi movies and just hanging out. I have always enjoyed reading. My father was a teacher in a primary school and we had lots of books at home. So one day I found a copy of Rashmirathi by Ramdhaari Singh Dinkar somewhere and read it and the effect was electric, since then I have always loved poetry.

Those days, I probably wanted to become a movie star, after watching so many Hindi films in a video-hall in Rajgir.

2. You started as a Poet, Writer rather early, with your poetry and writing. What inspired you to take this up? And what was your aim?

Abhay K. - And then I went to Patna to do 10+2 with the view of preparing for the medical entrance exam. My father thought I could become a doctor or an engineer. Obviously, no one wants you to become a poet or a writer including yourself. So, I completed my Intermediate (10+2) in Patna, could not get through any medical entrance exam, so I decided to go to Delhi University and study Geography there in order to become a Civil Servant. Again I had no intention to study literature. Becoming a writer never came to my mind. Afterwards, I went to JNU to study Geography and prepare for the Civil Services Exam. And only after getting into Indian Foreign Service in 2003, I started writing. So it began with a blog ‘Ideas and Universe’ which I started writing in April 2004. When I went to Moscow to learn Russian language on my first foreign assignment, I started writing my first book ‘The River Valley to Silicon Valley’- a memoir of my first 24 years. It was published in 2007. Then poems started flowing within me. My first poetry collection is titled- Enigmatic Love: Love Poems from the fairy-tale city of Moscow. It was published in 2009. Since then I have been writing poems regularly and have so far 8 collections of poetry—

The Alphabets of Latin America (2020)

The Magic of Madagascar is forthcoming.

As you can see from the titles of these books, I initially wrote about love and nature, but now I write about places. I create poetic-portraits of the places I visit and live by bringing together myths, history, geography etc.

I have also selected and edited a number of poetry collections—

100 Great Indian Poems have been translated into over half a dozen languages across the world.

3. What impact has your poetry had on the community?

Abhay K. - Well, it is difficult for me to assess that, but Maharaja Gangasingh University in Bikaner has awarded a PHD to Amit Dhawan on the topic ‘Cultural Construct of the Self: A critical study of Abhay Kumar’s poetry’ in 2018. A number of other academic papers have been written on my poetry books.

I co-founded ‘Poetry at the Monument’ initiative in Delhi to involve people in reading and listening to poetry at Delhi’s landmark monuments in 2011-12, which received lots of appreciation from the people.

I received SAARC literary award 2013, citation of the which read—‘He co-founded Poetry at the Monument movement to bring poetry back to Delhi and to pay homage to 3000 years of Delhi’s heritage. The movement that started in Delhi has spread across the whole of South Asia.’

When I was posted in Kathmandu, I started a monthly poetry event named ‘Poemandu’ which ran for 39 months. In Brasilia, I continued this monthly poetry reading with a different name ‘Cha Com Letras’ for 36 months and it continues in Madagascar with the name ‘LaLitTana’. These events have brought a lot of poets together and given them recognition, inspiration and support to continue writing poetry.

I wrote Earth Anthem in 2008 in Russia, which was put to music first in 2013 by Sapan Ghimire and in 2017 by Dr. L. Subramaniam. It has been translated into over 50 languages across the world and is played to celebrate Earth Day and World Environment Day every year by thousands of schools, organisations and people globally.

I also wrote a South Asia/SAARC song which was extensively played during the last SAARC Summit in Kathmandu in 2014.

I have also penned a Moon Anthem, which has been put to music by Dr. L. Subramaniam and sung by Kavita Krishnamurti. It was played live on major Indian TV channels hours before the landing of Chandrayaan on the moon in Sept 2019.

Hope all these above, have had some tangible or intangible impact on the community.

4. When and why did you pick up the quill? How much time did you devote to it, and did you keep your job alongside? How did you juggle both?

Abhay K. - As I mentioned earlier, I started writing in Moscow, first to record the story of my journey from a humble village in Bihar to the ramparts of the Lal Bahadur Shashtri National Academy of Administration in Mussorie and then to express the sense of awe and wonder I felt in Moscow and St. Petersburg, Russia. Then it became a habit to read and write poems.

I have not only kept my job but thrived in it. I was appointed India’s Ambassador to Madagascar in 2018 when I was merely 38, perhaps, one of the youngest Indian Ambassadors in the history of the Indian Foreign Service.

I have found synergy between the two. I think poetry and diplomacy complement each other. I have written in detail about the connections between poetry and diplomacy and poet-diplomats who have excelled in poetry to the extent of 7 of them winning Nobel Prize in literature. Ambiguity, Brevity, Sensitivity and Love of words, are some of the characteristics shared between both poets and diplomats.

5. Who is Your favorite Poet/ inspiration and why?

Abhay K. - I have many favourite poets who inspire me. However, just to name a few as it is not possible to name them all— Ramdhaari Singh Dinkar, Kabir, Kalidasa, Vidyapati, Amaru, Bihari, Walt Whitman, Emily Dickinson, Neruda, Octavio Paz, T.S. Eliot, Wislawa Szymborska, Khalil Gibran, Rumi, Hafiz, Rabindranath Tagore, Basho, Buson, Issa, Du Fu, Rilke, Baudelaire among others, because they show me extraordinary in ordinary.

6. Mention the success you have experienced.

Abhay K. - My biggest success has been to find motivation and inspiration to keep writing new poems and being able to do so along with a very demanding job as an Indian diplomat. Besides, I have been lucky to find publishers for the books or poetry collections I have written so far. My publishers have never complained. They have been able to sell the books, some of them like The Seduction of Delhi and 100 Great Indian Poems becoming bestsellers.

I have also had the opportunity to interact with the leading poets of our times such as Nobel Laureate Derek Walcott, Pulitzer Prize winners for poetry such as Vijay Seshadri, Forrest Gander and poet laureates at the Library of Congress in Washington DC such as Tracy K. Smith and Robert Hass and poet laureate of UK Simon Armitage whose poem ‘Lockdown’ recently inspired me to translate Meghadutam of Kalidasa from Sanskrit, Ruth Padel, George Szirtes and Benjamin Moser, winner of Pulitzer Prize 2020 for his biography of Susan Sontag, among others. It feels great to have some of them as friends.

I was invited to record my poems in the long running ‘The Poets and the Poems’ programme at the Library of Congress in Washington DC by Grace Cavalieri in 2018. That time, I was the first Indian poet to record for this prestigious programme, and it was such a great honour. My poetry recording for that programme can be heard here.

A museum in Brazil in the city of Formosa has put one of my poems titled ‘Formosa’ on permanent exhibition.

My poem-song Earth Anthem has been performed by the National Symphonic Orchestra of Brasilia and played by the musicians of Amsterdam Conservatorium. The first line of the Earth Anthem was quoted by the Christian Science Monitor in an article to mark the 50 years of Apollo Missions. BBC featured Earth Anthem video on 22 April 2020 on the occasion of the 50th anniversary of Earth Day.

100 Great Indian Poems which I selected and edited covering over 3000 years of Indian poetry from 28 Indian languages, to take Indian poetry to the world, has been translated into Portuguese, Spanish, Italian, Irish, French, Nepali, Russian and Malagasy and have been published in Brazil, Mexico, Italy and Madagascar so far.

7. Do you have any particular audience in mind when you write, an ideal reader?

Abhay K. - No, not really. Poetry is written for oneself. Others find it interesting is a mere coincidence!

8. What are the greatest lessons you have learned from your journey?

Abhay K. - Miracles happen. My own life is an evidence of that. That one should never stop dreaming and working hard, staying focused, to make one’s dreams come true.

9: What are your future plans?

Abhay K. - To continue writing poems, select and edit new poetry anthology, write new anthems— after Earth and Moon Anthems, I have written anthems for Mars, Venus and Sun and hope to write on other planets in our Solar System. I also plan to write poems in Magahi, my mother tongue which is spoken in a number of districts in Bihar including Nalanda and may be someday edit an anthology of Magahi poetry.

10: Your message for fellow Poets.

Abhay K. - Please keep writing, one poem at a time, or even a line at a time and you’ll surprise yourself one day. Even if you just write one good poem during your whole poetic journey, you have done your job well.

Abhay K. - Kavishala is a great initiative to bring poetry in the lives of our generation which is gradually becoming addicted to social media. Kudos to Ankur Mishra and his dynamic team for this noble endeavour to serve the muse of poetry. I wish Kavishala all the success.