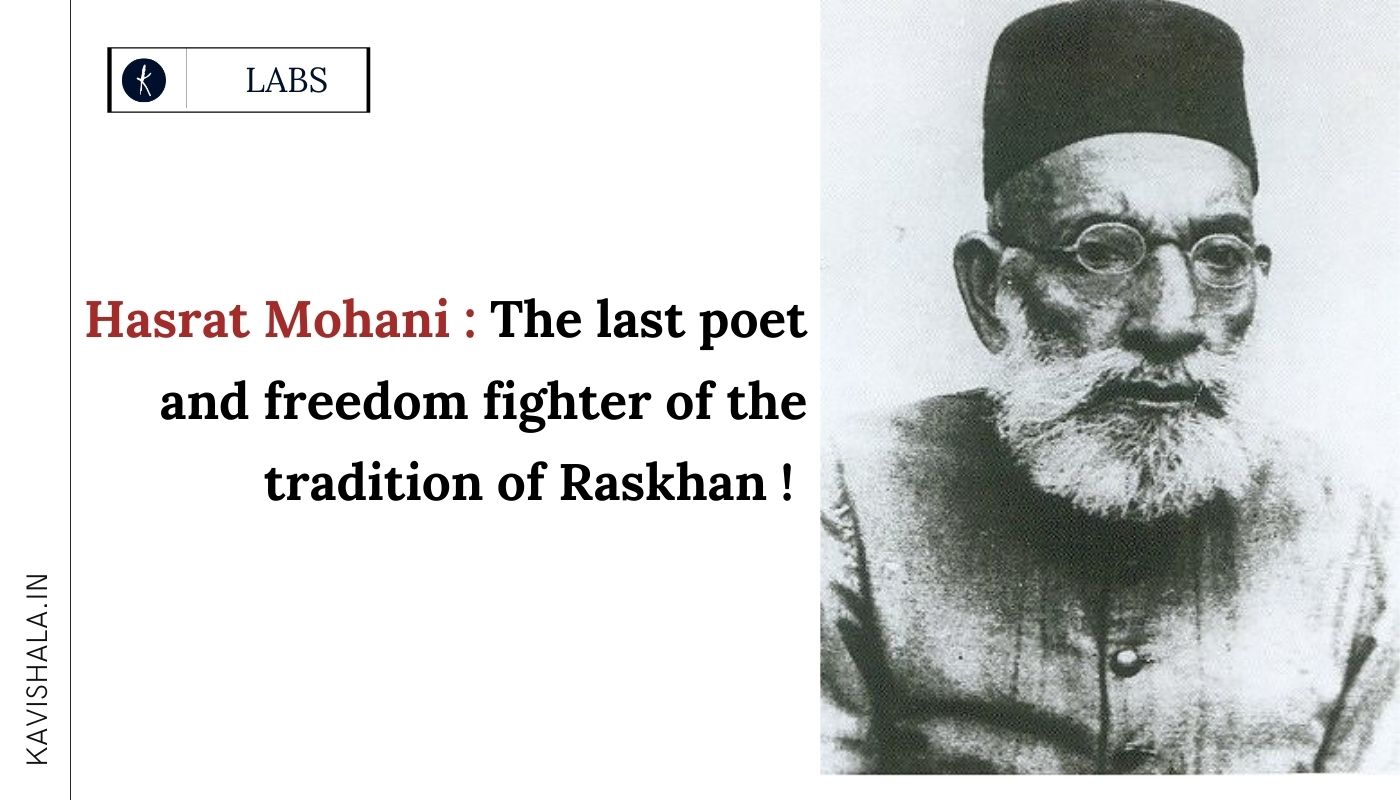 Hasrat Mohani: The last poet and freedom fighter of the tradition of Raskhan

Hasrat Mohani was born on 1 January 1875, in Mohani, a town in Unnao district of United Province in British India, Uttar Pradesh. His real name was Maulana Syed Fazl-ul-Hasan Mohani. He was a Romantic Poet of Urdu language, journalist, politician, parliamentarian and a fearless Indian freedom fighter.

In his early life, Maulana Hasrat Mohani was a brilliant and hardworking student as well as a topper in his first state level exams. Later, he studied in Aligarh Muslim University, where some of his colleagues were Maulana Mohammad Ali Jauhar and Maulana Shaukat Ali. His teachers in poetry were Tasleem Lucknawi and Naseem Dehlvi.

A few of his books are:-

3. Nukaat-e-Sukhan about Important aspects of poetry.

4. Mushahidaat-e-Zindaan on his Observations in Prison, etc.

A very popular ghazal "Chupke Chupke Raat Din" sung by Ghulam Ali, was penned by him.

He was also featured in the film Nikaah of 1982. The famous slogan of Indian freedom fighters " Inquilab Zindabad !! " was coined by Hasrat Mohani himself.

In 1921, Ram Prasad Bismil attended Ahmedabad Congress along with many volunteers from Shahjahanpur and occupied a place on the Dias. A senior congressman Prem Krishna Khanna and revolutionary Ashfaqulla Khan was also with him. Bismil played an active role in the Congress with Maulana Hasrat Mohani and got the most debated proposal of Poorn Swaraj passed in the General board meeting of Congress. Mohandas K. Gandhi, who was not in the favour of this proposal became quite helpless before the overwhelming demand of youths. It was another victory of Bismil against the Liberal Group of Congress. He returned to Shahjahanpur and mobilised the youths of United Province for non-cooperation with the Government. The people of U.P. were so much influenced by the furious speeches and verses of Bismil that they became hostile against British Raj.

Hasrat Mohani participated in the struggle for Indian Independence and was jailed for many years by British authorities. He was the first person in Indian History who demanded 'Complete Independence' (Azadi-e-Kaamil) in 1921 as he presided over an annual session of All India Muslim League. He was not only a practising Muslim but also a strong supporter of the communist philosophy, as he could see that the British could be defeated by following its principles :-

He was among the founders of the Communist Party of India. He was also imprisoned for promoting anti-British ideas, especially for publishing an article against British policies in Egypt, in his magazine 'Urdu-e-Mualla'. Afterwards, unlike some Urdu poets like Josh Malihabadi and Nasir Kazmi, and many Muslim leaders, he chose to live in India rather than move to Pakistan after independence (1947)in order to represent left over Indian Muslims on various platforms. In recognition for his efforts, he was made a member of the constituent assembly which drafted the Indian constitution. But unlike other members, he never signed it since he saw hypocrisy towards Muslim minorities in it.

According to Akhtar Payami, Hasrat's poetic genius has been acclaimed by many writers and critics. In the not too distant past (beginning and the first half of the 20th century), Hasrat Mohani, Jigar Moradabadi and Asghar formed a constellation of emerging poets in a crucial period of India's history. Major political developments were taking place in the subcontinent and the sun was about to set on the British Empire. As conscious members of society, poets and writers do not remain indifferent to the changes in their socio-political milieu. Not only India but the whole world was in a state of flux.