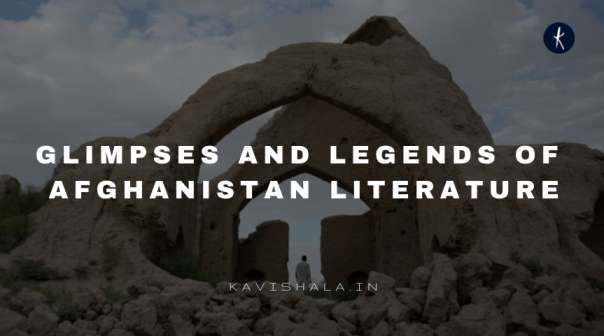 Glimpses and Legends of Afghanistan Literature

Kavishala presents the list of the top 10 most legendary Afghan Writers of all time. This list of famous Afghan Writers is sorted by HPI (Historical Popularity Index), a metric that aggregates information on a biography’s online popularity :

A famous saying from Afghan Writers that every individual should learn from :

“There is a way from heart to heart.

On earth it’s hard and heaven is far away.

Patience is bitter but its fruit is sweet.

A tree does not move unless there is wind.

With the highest HPI (Historical Popularity Index )of 86.53, Rumi is the most famous Afghan Writer. His biography has been translated into 99 different languages on Wikipedia.

He is also known as Jalāl ad-Dīn Mohammad Balkhī and more popularly simply as Rumi Being born on 30 Sept 1207 – 17th Dec 1273), was a 13th-century Persian poet, Islamic scholar, Maturidi theologian, and Sufi mystic originally from Greater Khorasan in Greater Iran. Rumi's influence transcends national borders and ethnic divisions: Iranians, Tajiks, Turks, Greeks, Pashtuns, other Central Asian Muslims, and the Muslims of the Indian subcontinent have greatly appreciated his spiritual legacy for the past seven centuries. His poems have been widely translated into many of the world's languages and transposed into various formats.

Rumi has been described as the "most popular poet" and the "best selling poet" in the United States. Rumi's works are written mostly in Persian, but occasionally he also used Turkish, Arabic, and Greek in his verse. His most prestigious Masnavi (Mathnawi), composed in Konya, is considered one of the greatest poems of the Persian language.

Famously, his works are read today in their original language across Greater Iran and the Persian-speaking world. Translations of his works are very popular, most notably in Turkey, Azerbaijan, the United States, and South Asia. His poetry has influenced not only Persian literature but also the literary traditions of the Ottoman Turkish, Chagatai, Urdu, Bengali, and Pashto languages.

Ali-Shir Nava'i is the 2nd most famous Afghan Writer with an HPI of 77.61. Due to his popularity, his biography has been translated into 50 different languages.

'Ali-Shir Nava'i from 9 Feb 1441 to 3 Jan 1501, also known as Nizām-al-Din ʿAli-Shir Herawī was a Turkic poet, writer, politician, linguist, Hanafi Maturidi mystic, and painter who was the greatest representative of Chagatai literature.

Basically, Nava'i believed that Chagatai and other Turkic languages were superior to Persian for literary purposes, an uncommon view at the time, and defended this belief in his work titled Muhakamat al-Lughatayn (The Comparison of the Two Languages).

Ali-Shir Nava'i emphasized that his belief in the richness, precision, and malleability of Turkic vocabulary as opposed to Persian. Because of his distinguished Chagatai language poetry, Nava'i is considered by many throughout the Turkic-speaking world to be the founder of early Turkic literature. Still many places and institutions in Central Asia are named after him.

Jami is the 3rd most famous Afghan Writer with an HPI of 75.91. His biography has been translated into 57 different languages.

Nūr ad-Dīn 'Abd ar-Rahmān Jāmī ( 7 November 1414 – 9 November 1492), also known as Mawlanā Nūr al-Dīn 'Abd al-Rahmān or Abd-Al-Rahmān Nur-Al-Din Muhammad Dashti, or simply as Jami or Djāmī and in Turkey as Molla Cami, was a Persian Sunni poet who is known for his achievements as a prolific scholar and writer of mystical Sufi literature. He was primarily a prominent poet-theologian of the school of Ibn Arabi and a Khwājagānī Sũfī, recognized for his eloquence and for his analysis of the metaphysics of mercy. His most famous poetic works are Haft Awrang, Tuhfat al-Ahrar, Layla wa Majnun, Fatihat al-Shabab, Lawa'ih, Al-Durrah al-Fakhirah. Jami belonged to the Naqshbandi Sufi order.

"He who goes to the blacksmith’s shop comes home with scorched clothes. Community is not created by force.

Every man thinks his own thoughts are best.

God has said start moving so that I may start blessing.”

With an HPI of 68.26, Khaled Hosseini is the 4th most famous Afghan Writer. His biography has been translated into 62 different languages.

Khaled Hosseini was born on 4th March in the year 1965 who is an Afghan-American novelist and UNHCR goodwill ambassador. His debut novel The Kite Runner (2003) was a critical and commercial success; the book, as well as his subsequent novels, have all been at least partially set in Afghanistan and have featured an Afghan as the protagonist. Born in Kabul, Afghanistan, to a diplomat father, Hosseini spent some time living in Iran and France. When Hosseini was 15, his family applied for asylum in the United States, where he later became a naturalized citizen. Hosseini did not return to Afghanistan until 2003 when he was 38, an experience similar to that of the protagonist in The Kite Runner. In later interviews, Hosseini admitted to feeling survivor's guilt for having been able to leave the country prior to the Soviet invasion and subsequent wars. After graduating from college, Hosseini worked as a physician in California, a situation he likened to "an arranged marriage".

The grand success of The Kite Runner meant he was able to retire from medicine in order to write full-time. His three novels have all reached various levels of critical and commercial success. The Kite Runner spent 101 weeks on The New York Times Best Seller list, including three weeks at number one. His second novel, A Thousand Splendid Suns (2007), spent 103 weeks on the chart, including 15 at number one while his third novel, And the Mountains Echoed (2013), remained on the chart for 33 weeks

With an HPI of 66.35, Sanai is the 5th most famous Afghan Writer. His biography has been translated into 21 different languages.

Hakim Abul-Majd Majdūd ibn Ādam Sanā'ī Ghaznavi (more commonly known as Sanai, was a Persian poet from Ghazni who lived his life in the Ghaznavid Empire at the time of its golden age, in medieval Khorasan, which is now located in Afghanistan. He was born in 1080 and died between 1131 and 1141.

With an HPI of 62.39, Anvari is the 6th most famous Afghan Writer. His biography has been translated into 17 different languages.

Anvari (1126–1189), full name Awhad ad-Din 'Ali ibn Mohammad Khavarani or Awhad ad-Din 'Ali ibn Mahmud was a Persian poet. Anvarī was born in Abivard (now in Turkmenistan) and died in Balkh, Khorāsān (now in Afghanistan). He studied science and literature at the collegiate institute in Toon (now Ferdows, Iran), becoming a famous astronomer as well as a poet. Anvari's poems were collected in a Deewan and contain panegyrics, eulogies, satire, and others. His elegy "Tears of Khorasan", translated into English in 1789, is considered to be one of the most beautiful poems in Persian literature. The Cambridge History of Iran calls Anvari "one of the greatest figures in Persian literature". Despite their beauty, his poems often required much help with interpretation, as they were often complex and difficult to understand. Anvari's panegyric in honor of the Seljuk sultan Sultan Sanjar (1117–1157), ruler of Khorasan, won him royal favor and allowed him to go on to enjoy the patronage of two of Sanjar's successors. However, when his prophecy of disasters in October 1185 failed, he fell out of favor with the kingship and was forced into a life of scholarly service, eventually taking his own life in 1189.

With an HPI of 62.37, Unsuri is the 7th most famous Afghan Writer. His biography has been translated into 17 different languages.

Abul Qasim Hasan Unsuri Balkhi died 1039/1040 was a 10-11th century 4 -5th solar Hejri Persian poet. ‘Unṣurī is said to have been born in Balkh, today located in Afghanistan, and he eventually became a poet of the royal court of Mahmud of Ghazni, and was given the title Malik-us Shu'ara (King of Poets) under Sultan Maḥmūd of Ghazna. His Divan is said to have contained 30,000 distichs, of which only 2500 remain today. It includes the romance epic Vāmiq u ‘Adhrā. The following dialog between an eagle and a crow, translated by Iraj Bashiri, is an example. In it, the King of Poets, Unsuri, compares his own status vis-a-vis that of a young poet who has joined the court recently.

With an HPI of 61.61, Gulbadan Begum is the 8th most famous Afghan Writer. Her biography has been translated into 15 different languages.

Gulbadan Begum 1523 – 7 Feb 1603 was a Mughal princess and the daughter of Emperor Babur, the founder of the Mughal Empire. She is best known as the author of Humayun-Nama, the account of the life of her half-brother, Emperor Humayun, which she wrote at the request of her nephew, Emperor Akbar. Gulbadan's recollection of Babur is brief, but she gives a refreshing account of Humayun's household and provides a rare material regarding his confrontation with her half-brother, Kamran Mirza.

She records the fratricidal conflict between her brothers with a sense of grief. Gulbadan Begum was about eight years old at the time of her father's death in 1530 and was brought up by her older half-brother, Humayun.

Later in 1557, she was invited by her nephew, Akbar, to join the imperial household at Agra. She wielded great influence and respect in the imperial household and was much loved both by Akbar and his mother, Hamida. Gulbadan Begum finds reference throughout the Akbarnama ("Book of Akbar"), written by Abu'l Fazl, and much of her biographical details are accessible through the work. Along with several other royal women, Gulbadan Begum undertook a pilgrimage to Mecca and returned to India seven years later in 1582. She died in 1603.

Born in 1962. With an HPI of 57.42, Atiq Rahimi is the 9th most famous Afghan Writer. His biography has been translated into 26 different languages.

Atiq Rahimi was born 26 February 1962 in Kabul is a French-Afghan writer and filmmaker.

Well, Niloofar Rahmani is the 10th most famous Afghan Writer. Her biography has been translated into 22 different languages.

Niloofar Rahmani was born on 27th Sep 1992) is the first female fixed-wing Air Force aviator in Afghanistan's history and the first female pilot in the Afghan Air Force since the fall of the Taliban in 2001. Though her family received death threats, she persevered to complete her training and won the U.S. State Department's International Women of Courage Award in 2015.