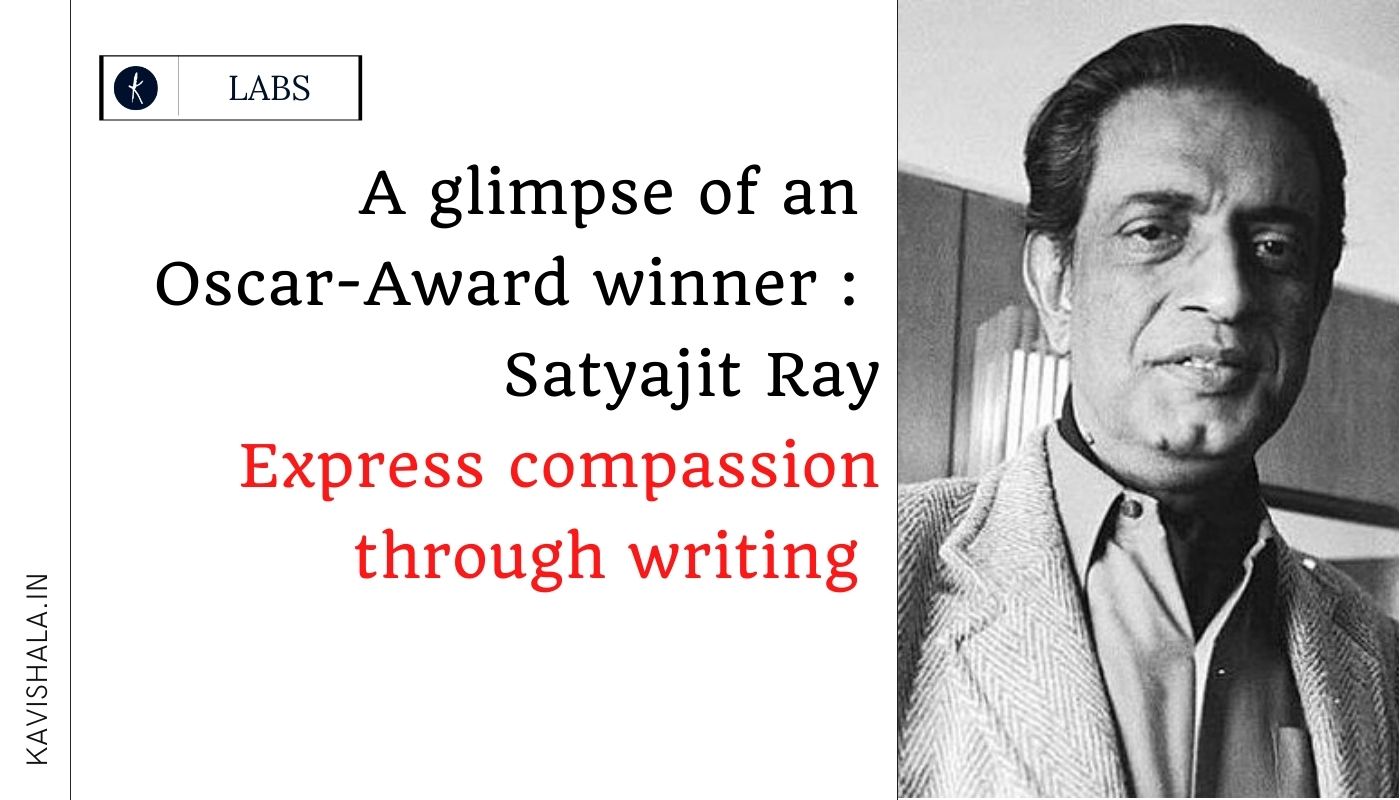 Inspiring the young generation to write Satyajit Ray says that-

I had developed this habit of writing scenarios as a hobby.

I would find out which stories had been sold to be made into films and I would write my own treatment and then compare it.

Satyajit Ray was an outstanding Indian film director, scriptwriter, author, essayist, magazine editor, illustrator, calligrapher, and documentary filmmaker. Ray is widely considered one of the greatest filmmakers of all time and was born on 2nd May 1921 Ray.

He remains in limelight for works such as The Apu Trilogy, The Music Room, The Big City, and Charulata. Ray was born in Calcutta to a renowned writer Sukumar Ray who was prominent in the field of arts and literature.

Ray had so far directed 36 films, including feature films, documentaries, and shorts, and authored short stories and novels, primarily for young children and teenagers.

->In 1978, he was awarded an honorary degree by Oxford University.

->Indian Government honored him with the Bharat Ratna, its highest civilian award, in 1992.

For many a year, I have traveled many a mile to lands

far away I've gone to see the mountains, the oceans I've been to view.

But I failed to see that lay.

Not two steps from my home.

On a sheaf of paddy grain - a glistening drop of dew.

Years later, Ray emerged as not only India's but

also one of the world's pre-eminent film-makers.

He stunned audiences with stories steeped in gritty neo-realism. His success in turn inspired yet another generation of master storytellers.

Film students no longer needed to look up to a de Sica or a Kurosawa.

They had their own Ray - a glistening drop of dew

on the sheaf of paddy, not two steps from their very doorstep.

1. My Years with Apu: A Memoir

Satyajit Ray's Apu Trilogy movies, namely 'Pather Panchali' (1955), 'Aparajito' (1956), and 'Apur Sansar' ('The World of Apu', 1959), describe the story of boyhood, adolescence, and manhood of Apu. In this memoir, Ray narrates his experience and thoughts during the making of the acclaimed Apu Trilogy movies. The book reveals the inspiring story of how one of the greatest filmmakers started his film-making career and should be read by every cinephile.

He originally wrote his memoir 'Childhood Days' in Bengali, and later it was translated to English by his wife Bijoya Ray. In this book, Ray talks about his passion for cinema, art, music, photography, and books which made him one of the most prolific personalities of his time. The stories in this memoir start from the author's early days and continue until when he began making films. Through 'Childhood Days' readers get a glimpse of the man that Satyajit Ray was.

This collection of spine-tingling stories is liked by people of all genres. Indigo is the mood in this book as Ray tells the stories of the supernatural, the peculiar, and the inexplicable with an unexpected twist at the end.

4. Our Films, Their Films

'Our Films, Their Films' as the title holds deep meanings and brings together Satyajit Ray’s writings and talks on filmmakers. Their Films talk about some films abroad which became landmarks in the history of cinema. The book gives an insight into film appreciation and should be read by aspiring filmmakers.

In this book from magicians to giant man-eating plants, hypochondriacs, and a host of other entertaining characters, everything could be found. The stories will transfix our readers with his vivid imaginations.