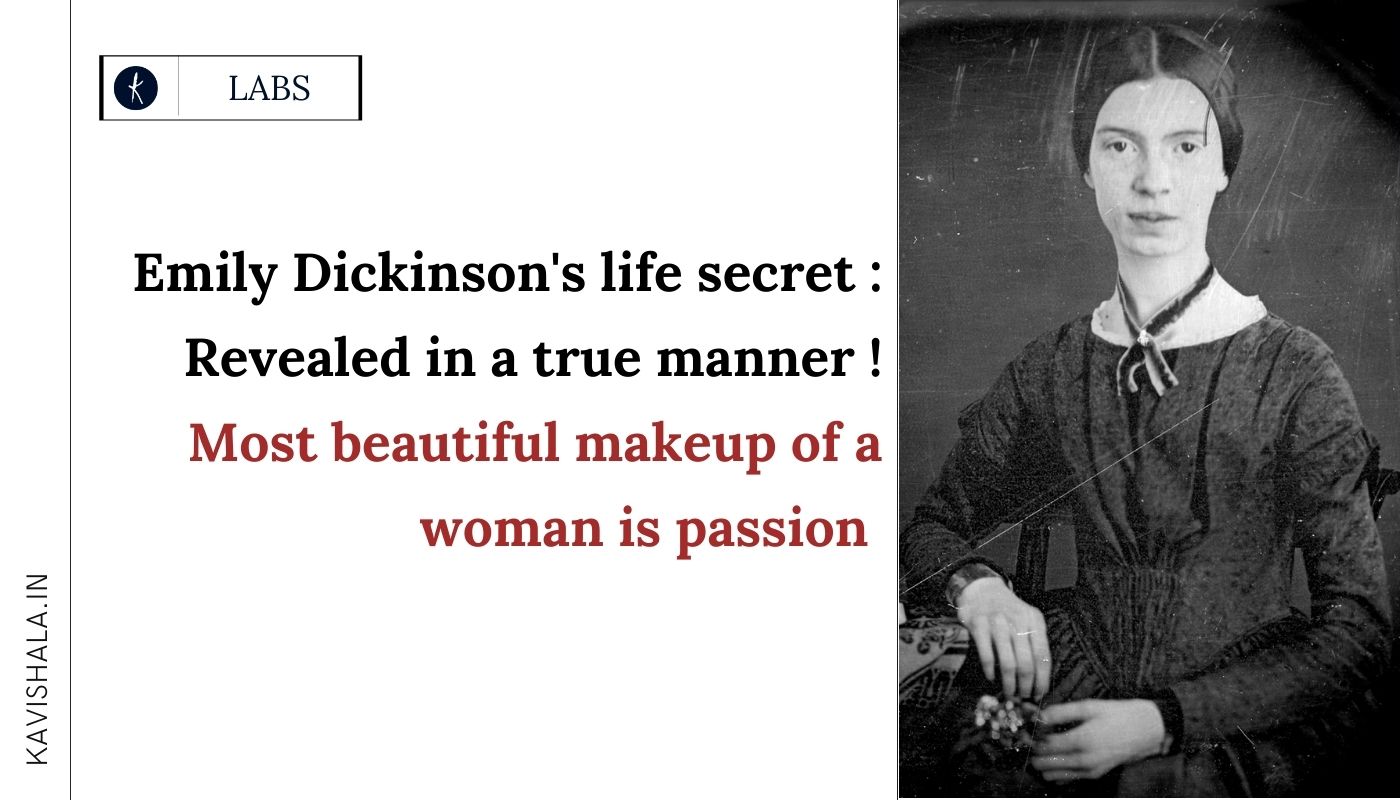 Beneath the still surface of the poetess, life lays a fiercely passionate nature and a closely guarded secret, that argues her biographer.

The most beautiful makeup of a woman is passion.

But cosmetics are easier to buy.

Emily Dickinson was a wonderful poet whose life has remained a mystery by the time and had remained controversial always. The running time has come to dispel the myth of a quaint and helpless creature, disappointed in love, who gave up on life. It was observed that she was unafraid of her own passions and talent; that her brother's sexual betrayal and the subsequent family feud had a profound effect on the Dickinson legend that has come down to us; and perhaps most significantly.

When she was born in 1830 into the leading family of Amherst, a college town in Massachusetts, she never left what she always called "my father's house". Townsfolk usually spoke of her as "the Myth".

On the face of it, the life of this New England poet seemed uneventful and largely invisible, rather forceful. She called it a "still – Volcano – Life", and that volcano rumbles beneath the domestic surface of her poetry and a thousand letters.

It's about changing the way the world perceives that strength.

Far from the helplessness she played up at times, she was uncompromising; until the explosion in her family, as she lived on her own terms.

At 17, as a student at Mount Holyoke in 1848, she refused to bend to the founder of her college, the formidable Mary Lyon. At this time Massachusetts was the scene of a religious revival opposed to the inroads of science. Emily, who had chosen mostly science courses, makes her ­allegiance clear:

"Faith" is a fine invention

When Gentlemen can see –

But Microscopes are prudent

When Miss Lyon pressed her students to be "saved", nearly all succumbed. Emily did not.

On the 16th of May, she owned, "I have neglected the one thing needful when all were obtaining it." It seemed that other girls desired only to be good. "How I wish I could say that with sincerity, but I fear I never can." When Miss Lyon consigned her to the lowest of three categories – the saved, the hopeful, and a remnant of about 30 no-hopers – she still held out.

Dickinson left no formal statement of her aesthetic intentions and, because of the variety of her themes, her work does not fit conveniently into any one genre. She has been regarded, alongside Emerson, as a Transcendentalist.

Flowers and gardens: As Farr notes that Dickinson's "poems and letters almost wholly concern flowers" and that allusions to gardens often refer to an "imaginative realm wherein flowers [are] often emblems for actions and emotions". She associates some flowers, like gentians and anemones, with youth and humility; others with prudence and insight.

Her poems were often sent to friends with accompanying letters and nosegays. Farr notes that one of Dickinson's earlier poems, written about 1859, appears to "conflate her poetry itself with the posies":

The Master poems: Dickinson left a large number of poems addressed to "Signor", "Sir" and "Master", who is characterized as Dickinson's "lover for all eternity".These confessional poems are often "searing in their self-inquiry" and "harrowing to the reader" and typically take their metaphors from texts and paintings of Dickinson's day. The Dickinson family themselves believed these poems were addressed to actual individuals but this view is frequently rejected by scholars.

Gospel poems: Throughout her life, Dickinson wrote poems reflecting a preoccupation with the teachings of Jesus Christ and, indeed, many are addressed to him. She stresses the Gospels' contemporary pertinence and recreates them, often with "wit and American colloquial language".Throughout the crater of her "buckled lips".