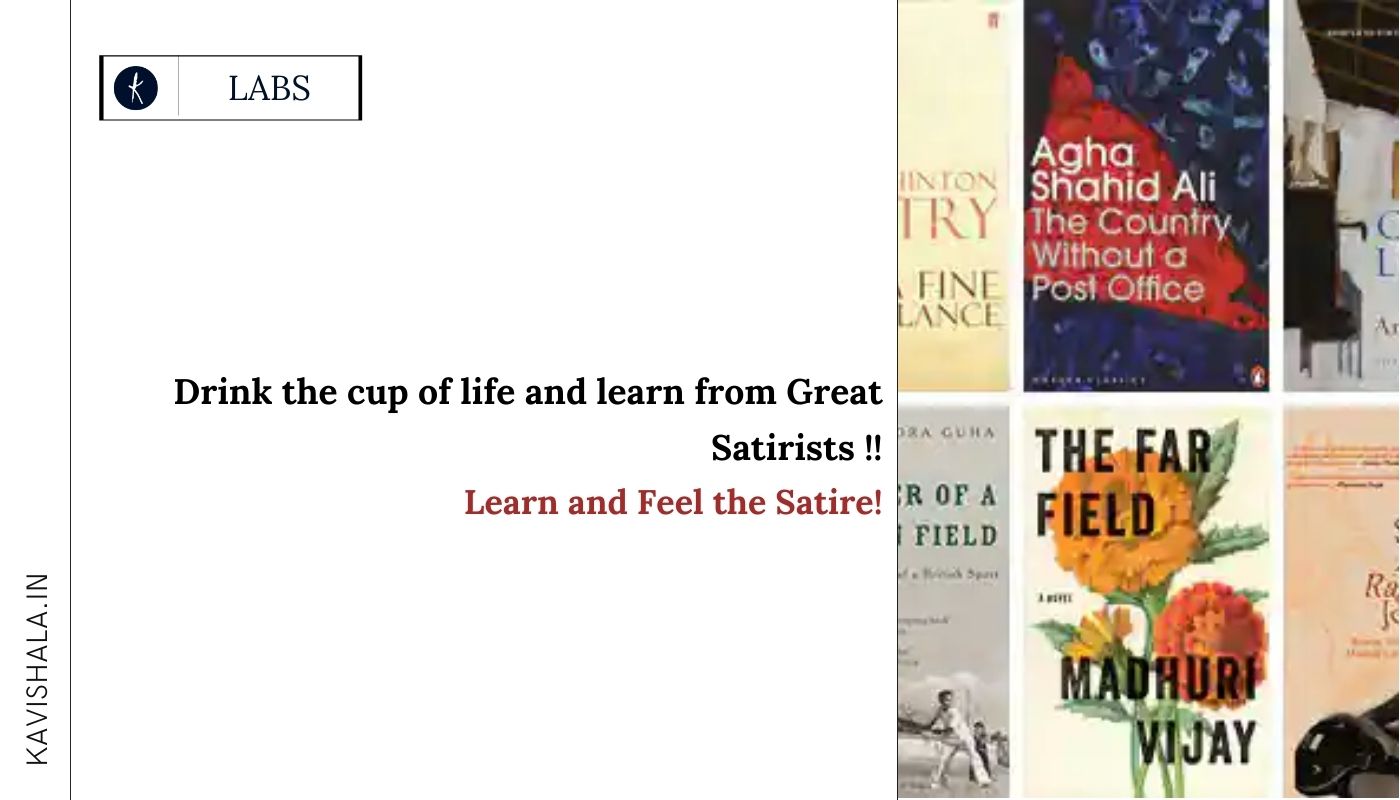 Drink the cup of life and learn from Great Satirists !

“He had the look of one who had drunk the cup of life and found a dead beetle at the bottom.”

Kavishala readers if you're into work and ethics that highlights the absurdity in issues that are actually pretty serious and make you feel loud sometimes, then you're probably a huge fan of satirical fiction.

The significance of Satirists in Literature?

If you aren't sure about which genre to read then, at least a few satirical books will help our readers in choosing the best one. Imagine dark humor, lots of ironies, and exaggeration veering on fantasy, all in the name of critiquing problematic political structures, societal norms, and even human ethics. Our basic goal is to hyperbolize what we accept as normal and expose its underbelly, while also helping us keep our sense of humor along the way.

Satire is a mode of interest, a mood-blowing verse, a mockery to expose, and so much to discover. Explore a few satire books we deemed the best among them and concluded here for you :

He is an outstanding Indian Author, educationalist, and Satirist.

Also possessing the responsibility as the Chairman of Grameen Mukt Vidhyalayi Shiksha Sansthan and the president of the First Aid Council of India.

His famous book SAMANVYA was released by Ram Niwas Goel.

Khushwant Singh was a significant post-colonial writer and Satirist in the English language, the late Khushwant Singh was known for his undistinguishable secularism, power of wit, and deep passion for poetry. A regular contributor by heart to various national dailies, Singh was also famous for his novel Train to Pakistan penned in the year 1956.

One of the most popular social satirists in India, the late Jaspal Bhatti graduated from Punjab Engineering College as an electrical engineer.

He was famous for street plays like My Nonsense Club during his college days and hit television show Flop Show.

Generally, most of his plays were spoofs ridiculing corruption in society. Before stepping into TV, he was a cartoonist for the Tribune newspaper in Chandigarh

Sharad Joshi was a Hindi poet, writer, satirist, and a dialogue and scriptwriter for Hindi films and television. His stories have been converted into the SAB TV show Lapataganj. He also wrote the dialogues of Yeh Jo Hai Zindagi and Dil Hai Ke Manta Nahi. He was awarded the Padma Shri in 1990.

Kaka Hathrasi was a remarkable Hindi satirist and humorist poet of India. His real name was Prabhu Dayal Garg, though he wrote under the name Kaka Hathrasi, after his hometown Hathras.

Moreover, he had published over 42 collections of humorous verses. In 1932, he established Sangeet Karyalaya, being a noted publishing company for books on Indian classical music and dance, and subsequently in 1935.

Later on, he also started publishing a monthly magazine Sangeet, both in Hathras.

Hari Joshi was initially born in 1943 in the Harda district of Madhya Pradesh, Hari Joshi is a Hindi writer, Satirist, novelist, and poet. He is a prominent writer of modern Hindi literature and is popularly known for his sharp satire.

On Feb13th, 2013, he received the prestigious Vyangya Shree Samman. In 1995 he was a recipient of Vageeshwari Samman for his book Vyangya Ke Rang.

He also received the Madhya Pradesh lethal Sangh Samman in 2002.

“Passing through the early fog,

the fruitseller’s boat nudged the edge of the canal beside the Palazzo Malipiero. All around was stillness.

Casanova whispered to me, “This is the type of pause that occurs just in the instant before la petite mort.

﻿The breath held before the gasp followed by the exquisite release.”