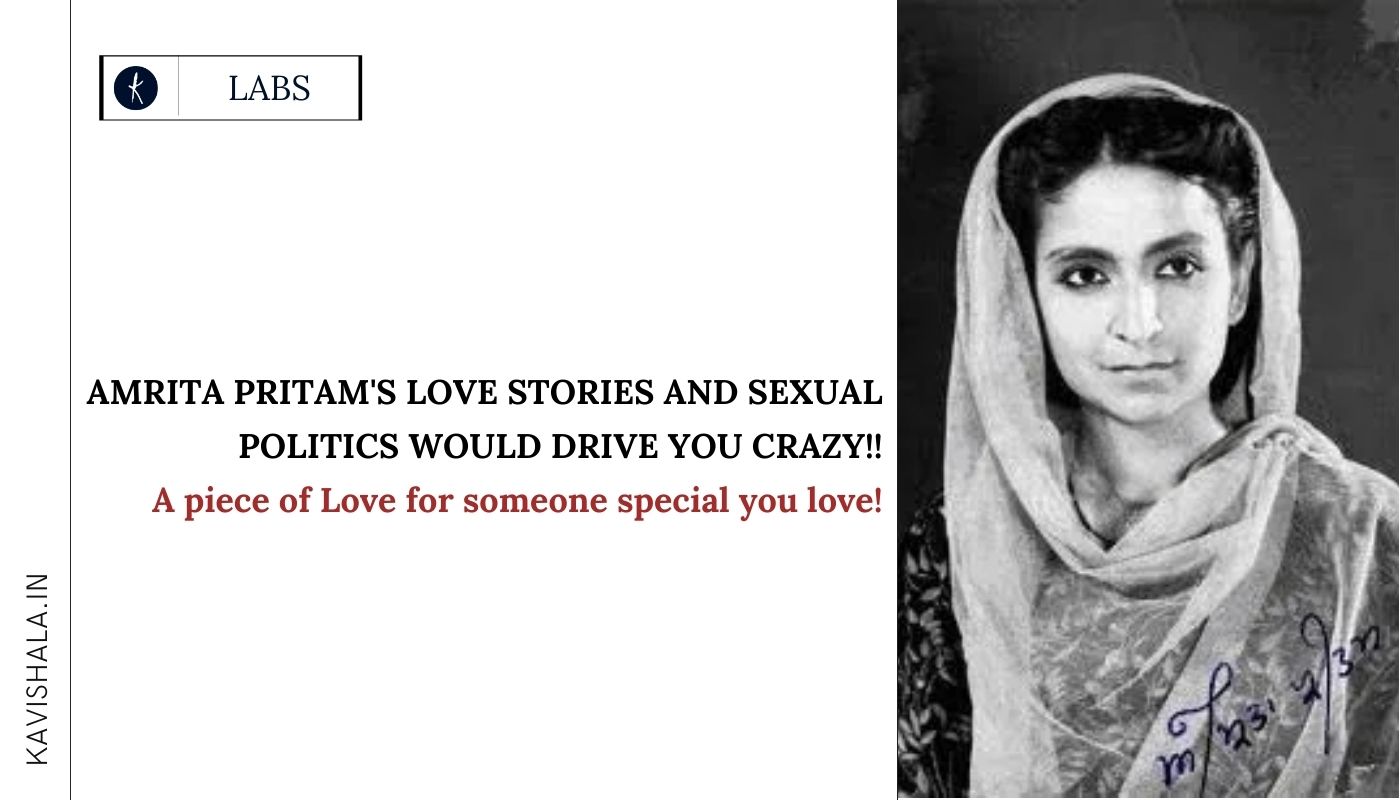 Kavishala brings for you a twist in today's content with some extra toppings over the cake and moreover a memory of Amrita Pritam who touched the souls of one's body and translated it into the essence of her writings.

That was our tryst, yours and mine.

We slept on a bed of stones,

and our eyes, lips, and fingertips,

became the words of your body and mine,

Often thinking from a minority perspective as an American, it’s a tough task to jest beyond and be creative with intellectual predecessors who are writing from vast cultures and ethics of origin of Anglophone literary marketplace. For South Asian women writers, in the literary arts, who are looking to challenge the patriarchal hegemony of Anglo-American literature, Amrita Pritam is a well-known writer.

During the 1940s, she came to her prominence as a political and feminist writer in India, working in Punjabi literature, then in Hindi and Urdu translation, and finally switched internationally. By 1950 like Simone de Beauvoir and Betty Friedan in the West, Pritam was challenging patriarchal values at home, redefining gender roles and narratives assigned to women, and openly challenging heteronormative sexual politics. For the time being, she ushered an innovative wave of feminist literature in mid-century India.

Even she faced criticism for her work from her male counterparts within Punjab, Hindi, Urdu, and South Asian publishing industries at large.

In the gaslight, I don’t know

you must be waiting—

with each and every gulp,

with each and every bill,

with each and every beautiful face,

oh, the father of

and I’m sitting by the flame

of an earthen lamp, under the rooftop

I am waiting for your faltering

steps, the collar of your shirt:

so ugly, so dirty, and wet

with the stain of alcohol,

the mother of your

While the poem “Night” explores the consequences and stigmas attached to a fictitious woman who's being flirtatious during her pregnancy, infidelity, and extramarital sex, the narrator of Pritam’s poem is a woman who takes responsibility for her sexual identity even as the speaker wavers between the archetypal gender roles of the neglected housewife and the whore.

Amrita’s poem describes a love affair gone awry: a woman who is pregnant with her absentee lover’s child is waiting under the rooftop of his ancestral home for his drunken return. The ambiguity here lies within the woman’s legitimacy. Is she the forsaken wife of a drunken man, who is spending his evening coveting “with each and every beautiful face” of a loose woman or a prostitute, or is she a “loose” woman, herself, who has come to his family home to confront him with her pregnancy?

Has she gotten herself into this physical and psychological bind by coveting with a man outside of wedlock? The notion of licit and illicit behavior runs like an electric current and energetic fluid in veins during adolescence throughout the entire poem.

The woman, who is a heroine, chooses a man, Dr. Dev (he isn’t a doctor yet though), but this match isn’t acceptable to her parents. She has to leave him, but after she has borne him a son; she is then forced to marry another man. A second child is born and she thinks that this child, a girl, is her first child, the boy. After a while, she decides to tell her husband everything, for she feels it is not fair for him to not know about her past. She explains how she has had an illegitimate child. Of course, they part. The husband appreciates the woman from the very bottom of his heart, but society demands that he leave her.

While Pritam’s novel, Dr. Dev, and poems like “Night” and “The Scar” openly speak of taboo subjects such as extramarital affairs, unwanted pregnancies, and sexual politics between men and women, her writing, overall, demonstrates the difficulties of challenging gender expectations in order to create narratives of equalized power between men and women during the mid-20th century.

Basically, there is a prejudice against women in literature. Men take women’s writing lightly; they doubt a women’s sincerity.

She proclaims sadly, "When I got this Sahitya Akademi Award, and with it, fame, the leading English daily in Delhi wrote that I got my popularity in Punjabi literature because of my youth and beauty. I felt very sorry to read that. Why not talent? They can admire the beautiful woman, but not much talent. "

Here Pritam observes that while her male contemporaries were lauded for their literary accomplishments, privileged, and praised publicly for their lyrical brilliance, she, as an award-winning female poet, was haunted by questions of legitimacy and dilettantism throughout her career.

What are you waiting for? Go grab the best love stories of Amrita Pritam and dive into the mysteries of Love and relationships along with a spice of Sexual Politics of that era :)