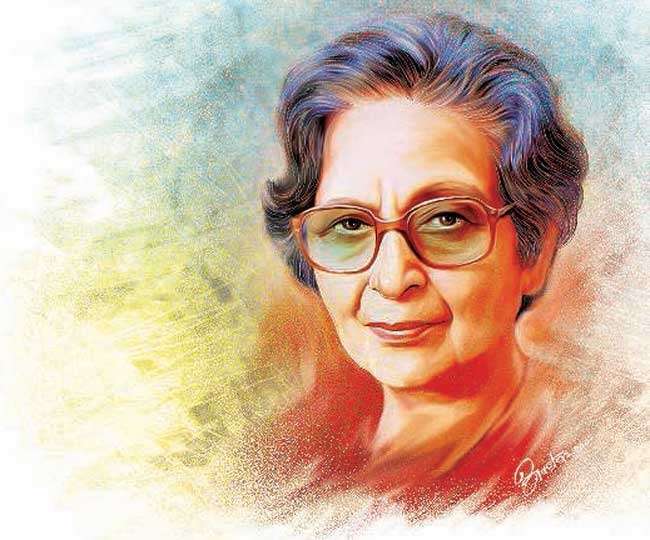 Amrita Pritam : The Lady who led the Revolution of Sex Politics in India!

Amrita was the first recipient of the Punjab Rattan Award conferred upon her by Punjab Chief Minister Capt. Amarinder Singh.

She was also the first female recipient of the Sahitya Akademi Award in 1956 for Sunehadey (poetic diminutive of the Punjabi word (Sunehe), Amrita Pritam received the Bhartiya Jnanpith Award, India's highest literary award, in 1982 for Kagaj te Canvas (Paper and Canvas).

She also received the international Vaptsarov Award from the Republic of Bulgaria (1979) and Degree of Officer dens, Ordre des Arts et des Lettres (Officier) by the French Government (1987). She was nominated as a member of Rajya Sabha 1986–92.

During the end of her life, she was been awarded by Pakistan's Punjabi Academy, to which she had remarked, Bade dino baad mere Maike ko meri Yaad aayi.(My motherland has remembered me after a long time); and also Punjabi poets of Pakistan, sent her a chaddar, from the tombs of Waris Shah, and fellow Sufi mystic poets Bulle Shah and Sultan Bahu. Celebrated poet and novelist Amrita Pritam is one of the most recognized Punjabi authors of the 20th century. Although she has more than 100 books to her credit, she is best known for her novel Pinjar. Amrita Pritam wrote in Punjabi and Hindi, but her works have been translated into many languages, including Danish, Japanese, French and Mandarin.

This interview was conducted in Hindi and Urdu by my grandmother’s sister, Mukti Verma, who is 85 years old today. Her writer husband and she were friends with Amrita Pritam and growing up, I often heard the names of Amrita and Imroz at their home in Delhi.

She said "The most important thing in life is happiness. But then so much of what we go through in life depends upon our ruling planets. You know our elders chanted on a 108-bead string. If you consider the real reason they did this, you will realize it is the chanting of 12 zodiac signs and 9 planets i.e. 12x9 = 108. These 108 planets travel throughout the universe and influence our lives."

An Incident of Amrita's life that would make you cry:

Amrita Pritam crying with tears said, "When, I was very young and was crying near my mother’s bed as she was on her last breath. One of my friends came by and bid me thus—Amrita, wake up. Don’t cry. God always listens to children. Go! Pray to God for your mother’s life." I got up and started praying fervently for my mother’s life, but maybe her time was up and she passed away. My prayer was not accepted by the almighty. This incident left a lasting impression on my mind. After that, when anyone asked me if there was a God, I would answer—“No, if God were there, wouldn’t he have listened to a child’s implorations?"

She added saying, "I consider astrology to be a complete science. These planets, constellations, hold a special place in our lives. The more immersed you are in the understanding of this science, the more accurate your calculations will be. So much of what we go through is written in the stars."

"I do not decry the importance of science. I do believe that scientific discoveries have done many wonderful things for us. Science has progressed, it has established its suzerainty over every aspect of our life like a sorcerer. But as long as science is estranged from spiritual power, it cannot give happiness to human beings. It cannot function in and by itself for the overall betterment of human life."

This poem is highly relatable to Amrita's Life :

And so today I write to you oh fellow poet!

Yes, I know this will take you by surprise

For I know, you write about host of issues;

From life to death, from heaven to hell,

From wedding to funeral, from good

To evil, from ugly to the beautiful

Just to mention, my friend, but few.

My writing to you is like buying a steak

For a cowboy and a gun for a soldier,

For you can understand and speak

The language of the wise.

And so I am not crippling myself

With the manacles of rhythms nor rhymes,

Though with sweetness and beauty,

They grace our poems.

Now lend me all your ears, my friend,

And hear all that I wish to tell.

Many a time have you, with dexterity,

With perfect skill and beauty,

Many a time, with your powerful words,

Have you melted the hearts of tyrants,

Even the last time in school,

I read, with your poems, you changed

The course of history and ideas.

It is amazing, how you are adorned.

But I wish to make one request from you,

Be calm and do me but one favor,

When I am left with few seconds

On my death bed, pick your pen

And describe the scene to the world

So that no one will be sad,

Describe it to my children,

So that no one will cry,

Describe it to my family,

So they won't feel the loss,

This I ask of you, oh fellow poetess!