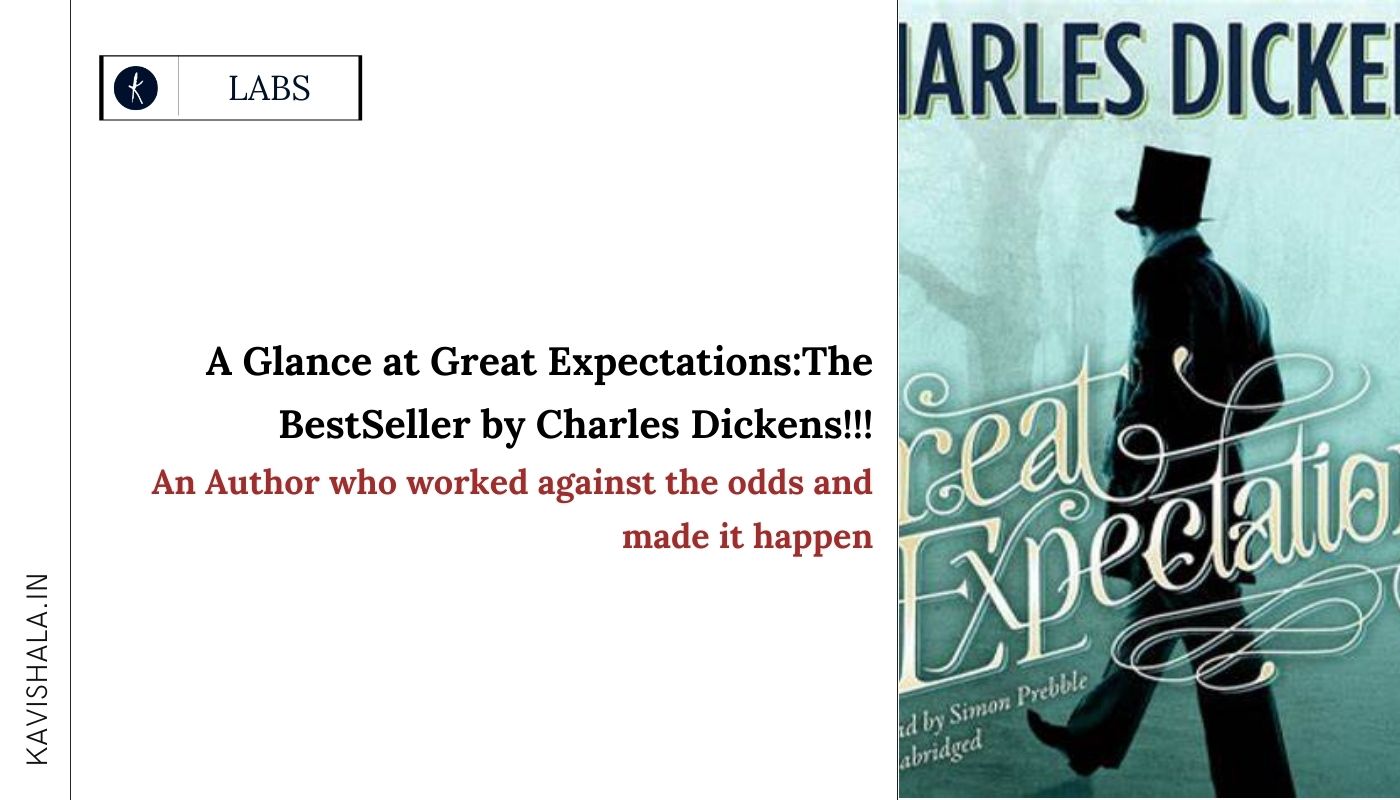 A Glance at Great Expectations:The BestSeller by Charles Dickens!

“Maybe this is why we read,

and why in moments of darkness we return to books:

to find words for what we already know.”

A young orphan Pip who lived with his sister and her husband in the marshes of Kent sits in a cemetery. One evening while looking at his parents’ tombstones. Suddenly, an escaped convict springs up from behind a tombstone grabs Pip and seeks him to bring him some eatables for his leg irons. He obeys, but the fearsome convict is soon captured and protects Pip by claiming to have stolen the items himself.

No sooner Pip is taken by his Uncle Pumblechook to rejoice at Satis House, the home of the wealthy dowager Miss Havisham, who is extremely eccentric: she wears an old dress everywhere she goes and keeps all the clocks in her house stopped at the same time. During his visit, he meets a beautiful girl named Estella, who treats him contemptuously.

But he hopes that Miss Havisham intends to make him a gentleman and marry him to Estella, but his hopes are dashed when, after few months of regular visits to Satis House, Miss Havisham decides to help him become a common laborer in his family’s business.

Hence the suspense remains as a complicated mystery which consequently begins to fall into place when Pip discovers that Compeyson was the man who abandoned Miss Havisham at the altar and that Estella is Magwitch’s daughter. Miss Havisham has raised Estella to break men’s hearts, as revenge for the pain, her own broken heart caused her.

As the weeks pass, Pip sees the good in Magwitch and begins to care for him deeply. Before Magwitch’s escape attempt, Estella got married to Bentley Drummle.

The time comes for Pip and his friends to spirit Magwitch away from London. Just before the escape attempt, Pip is called to a shadowy meeting in the marshes, where he encounters the vengeful, evil Orlick. Orlick is on the verge of killing Pip when Herbert arrives with a group of friends and saves Pip’s life. Pip and Herbert hurry back to effect Magwitch’s escape.

Magwitch and Compeyson quarrel in the river, and Compeyson is put to death. Magwitch dies, and Pip loses his fortune. Magwitch feels that his deeds are God’s forgiveness and dies at peace. Gradually Pip falls ill and Orlick, after stealing Pumblechook, is now in jail; Miss Havisham died and left most of her fortune to the Pockets; Biddy has taught Joe how to read and write. After Joe leaves, Pip decides to rush home after him and marry Biddy, but when he arrives there he discovers that she and Joe have already married.

REVIEW OF THE BOOK :

On the contrary Great Expectations, seems to have attained the mastery of powers that formerly more or less mastered Dickens.

In Great Expectations the real power of external observation is finer and deeper even than Thackeray's; and yet, owing to the presence of other qualities, the general impression is not one of objective reality. The author palpably uses his observations to shape, dispose of, penetrate, and contrive everything, and the whole action in every event that could have occurred only in his own dreams.

This book is, indeed, an artistic and colorful creation, of humorous and pathetic scenes, that clearly demonstrates that Charles Dickens is now in his prime, and not in the decline of his great powers of words and ideas in practicality.