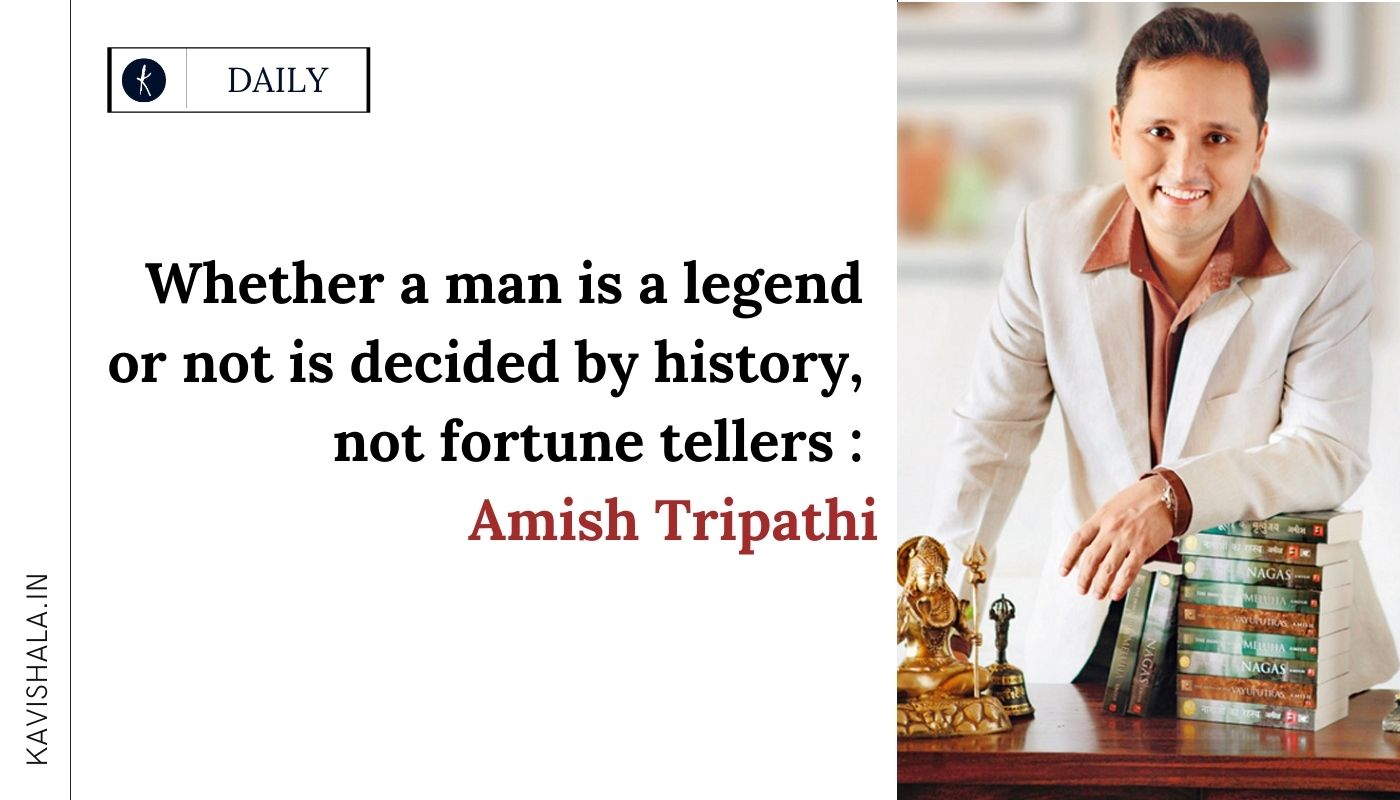 Whether a man is a legend or not is decided by history, not fortune tellers : Amish Tripathi

“A man becomes a Mahadev, only when he fights for good. A Mahadev is not born from his mother's womb. He is forged in the heat of battle, when he wages a war to destroy evil. Har Har Mahadev - All of us are Mahadev.”

He was born on 18 October 1974 in Mumbai, India, Tripathi grew up in a religious household. His grandfather was a Pandit and a teacher at Banaras Hindu University. He belonged to a middle-class family, who encouraged the religious and worldly learning. Since a very early age he was a voracious reader. One of his favourite subjects was history.

Shiva Trilogy became a huge commercial success acquiring the status of the most rapidly sold books in Indian history. The trilogy has been translated into 14 different languages. Moreover, Dharma production of Indian cinema has recently bought the film rights for The Immortals of Meluha.

He has been declared one of the top 100 celebrities in India and India’s New Icon. As to honor his contribution he was awarded Society Young Achievers Award for Literature.

Following is a quick review on some of his well known books :-

This is the First book by Amish Tripathi and the first part of Shiva Trilogy. The story is about Shiva a normal human being just like us without any power and his transformation from a Human Being to The God of Gods.

The story is about Shiva the Chief of Gunas, a tribe from Mount Kailash. Here Shiva is trying to protect his tribe from the foes and to do so he accepts the proposal to migrate to Meluha, the richest and most powerful empire in India.

When Shiva and his tribe entered Meluha, Ayurvati one of the best doctors in the world gave Shiva and his members Somras. After consuming Somras Shiva’s throat turns blue, which shows the signs of Neelkanth the warrior and soon Shiva with Nandi is sent to Devagiri the capital city to meet Emperor Daksha.

After seeing the Neelkanth of Shiva Emperor Daksha found that the search of the God finally ends and Shiva will save the Chandravanshis and Nagas. The book takes you on a beautiful journey of Shiva his finding of the true self, Undying love for Sati and The real difference between Good and Bad.

The Secret of The Nagas by Amish Tripathi is the second book in the series of Shiva Trilogy series. The story continues from the leftovers of The Immortals of Meluha.

Here Shiva and Sati both start their journey from Swadweep to Kashi and many other kingdoms with an aim in mind to find and kill the evil Nagas who killed Shiva’s best friend, Brihaspathi.

As he is in his journey to kill the Nagas, he meets the Nagas Queen and the Lord of People, many secrets are revealed in it, and so-called friends become foes and foes became friends. The book is the beauty by Amish Sir and is well-written part two of the series.

The Oath of the Vayuputras is the third and the final part of Shiva Trilogy here every mystery has been solved, and Shiva comes to know about the real evil “Somras” and its ill effects on the people of India and how it lead to the birth of Naga babies due to it.

After knowing the real cause, the holy war was declared. As the battle continues Shiva travels to the land of Pariha to consult with Vayuputras and by the time he returns, the was has been ended which caused a big impact to Shiva and results in the destruction of Melha by Shiva.

This part is the conclusion of The Shiva Trilogy with the last book being a little slow and lengthy compared to the first two.

The story begins with King Dashrath of Ayodhya being defeated in a war by Lankan trader Raavan, and the birth of his son Ram then following his childhood, Politics surrounding him of being the King of Ayodhya, His relationship with his brother Lakshman and wife Sita.

The book is good and with the good writing style and engaging narration, but it may disappoint many.

Sita: Warrior of Mithila is the second book in the Ramchandra series as every book in the series is based on one of the character of the Ramayana this book is based on the story of Sita.

The story starts with how Janak, the king of Mithila and his wife Sunaina during a trip, find a child on the road, being protected by a vulture. They adopt the child and name her Sita then her days in the ashram of Rishi Svetaketu, where she learned about martial arts and gains knowledge on different subjects befriend with Radhika, and her cousin Hanuman.

Then her return to Mithila, her marriage alliance with Ram through a Swayamvar and many more to go when you read it.

Raavan: Enemy of Aryavarta is the third book by Amish sir in the series of Ram Chandra and the book is based on the inside and not so known story of Ravana the greatest evil of all time.

The book is about the backstory of Ravan about his childhood, and He was power-hungry from childhood. Ravan a child born as Naga and kept secret from others in his tribe and when his brother is born as Naga as well then his fight with the tribe to protect his brother.

His work as a smuggler at the tender age of ten and how he protects his family and conversion from a trader to the greatest king and his war story with Dashrath, the king of Ayodhya and his desire to marry Sita and many stories.