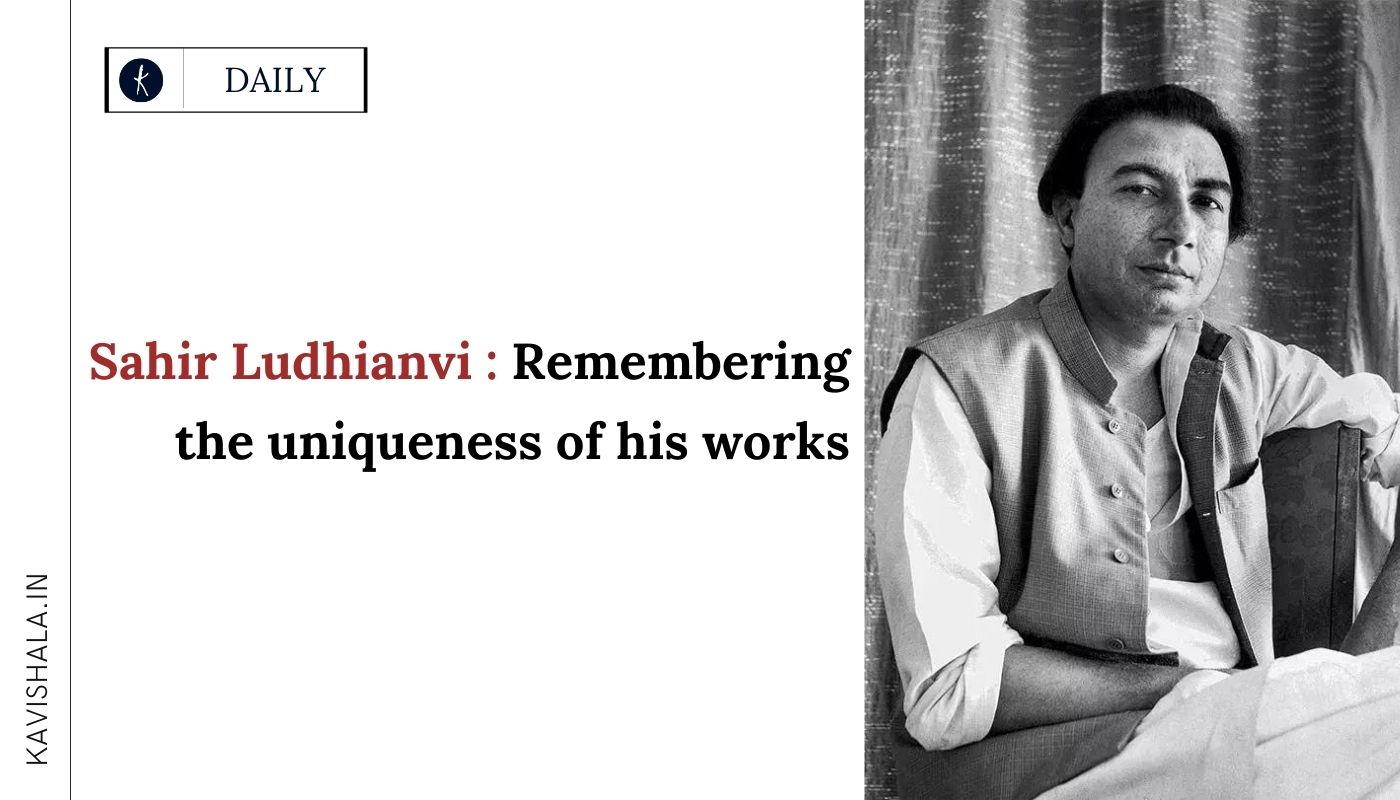 Sahir Ludhianvi : Remembering the uniqueness of his works

Sahir Ludhianvi was a Popular Urdu poet, Hindi lyricist and songwriter. Sahir Ludhianvi was known to be very egotistic, perhaps as a result of his Zamindar background; he fought for, and became the first lyricist or songwriter, To get royalties from music companies. Sahir insisted on writing the songs before The song was composed, against the Bollywood norm.

At the height of his Popularity, Sahir is known to have demanded a rupee more than what was paid To Lata Mangeshkar for singing it. It was on Sahir's insistence that All India Radio Started crediting lyricists along with singers and music composers for songs it Aired. He won the Filmfare Award twice, in 1964 For his songs Jo Wada Kiya ( Taj Mahal) and in1977, Kabhi Kabhie Mere Dil Mein (Kabhi Kabhie) and in 1971 Was awarded the Padma Shri.

Uniqueness of his poetry :-

Sahir Ludhianvi was different from other writers of that era. he was best at pouring out bitter but sensitive lyrics over the Declining values of society, the senselessness of war and politics, and the Domination of materialism over love. He wanted to acknowledge the conditions of the farmer crushed by debt, the soldier gone to fight in wars, the woman forced to sell her body, the youth frustrated by Unemployment, the family living on the street and other victims of society through his works. His Lyric from Payasa when lead actor Guru Dutt (Vijay) was passing through a red Light area by singing this song, moved even Pt. Jawaharlal Nehru, Honourable Prime minister of India that time.

Sahir Ludhianvi's poetry had a "Faizian" quality. He was a fearless writer and was ture to his word. Sahir raised questions on the society if something seems to be wrong to him without hesitation . He would pick on the self-appointed Custodian of religion, the self-serving politician, the exploitative capitalist, and The war-mongering super-powers.

Sahir's poetry reflected the youth. Whether it was the arrest of Progressive writers in Pakistan, the launch of the satellite Sputnik or the Discovery of Ghalib by a government lusting after minority votes, Sahir reacted With a verve not seen in many writers' work. Kahat-e-Bangal ("The Famine of Bengal"), written by a 25-year-old Sahir, bespeaks maturity that came early. His Subah-e-Navroz ("Dawn of a New Day"), mocks the concept of celebration when The poor exist in squalor.

Perhaps Sahir is the first renowned Urdu poet, who, could express his view Towards The Tajmahal in a complete different way.

here, The poet asks his lover to meet him anywhere else but Tajmahal. A tomb which Has been a symbol of luxurious monarchy for years, there is no need to make Journey of love by two beautiful but not famous hearts there.

Sahir will always be remembered as a poet who made his creation a lesson for all Ages of Urdu poetry to come. In this way he contradicts his own creation: