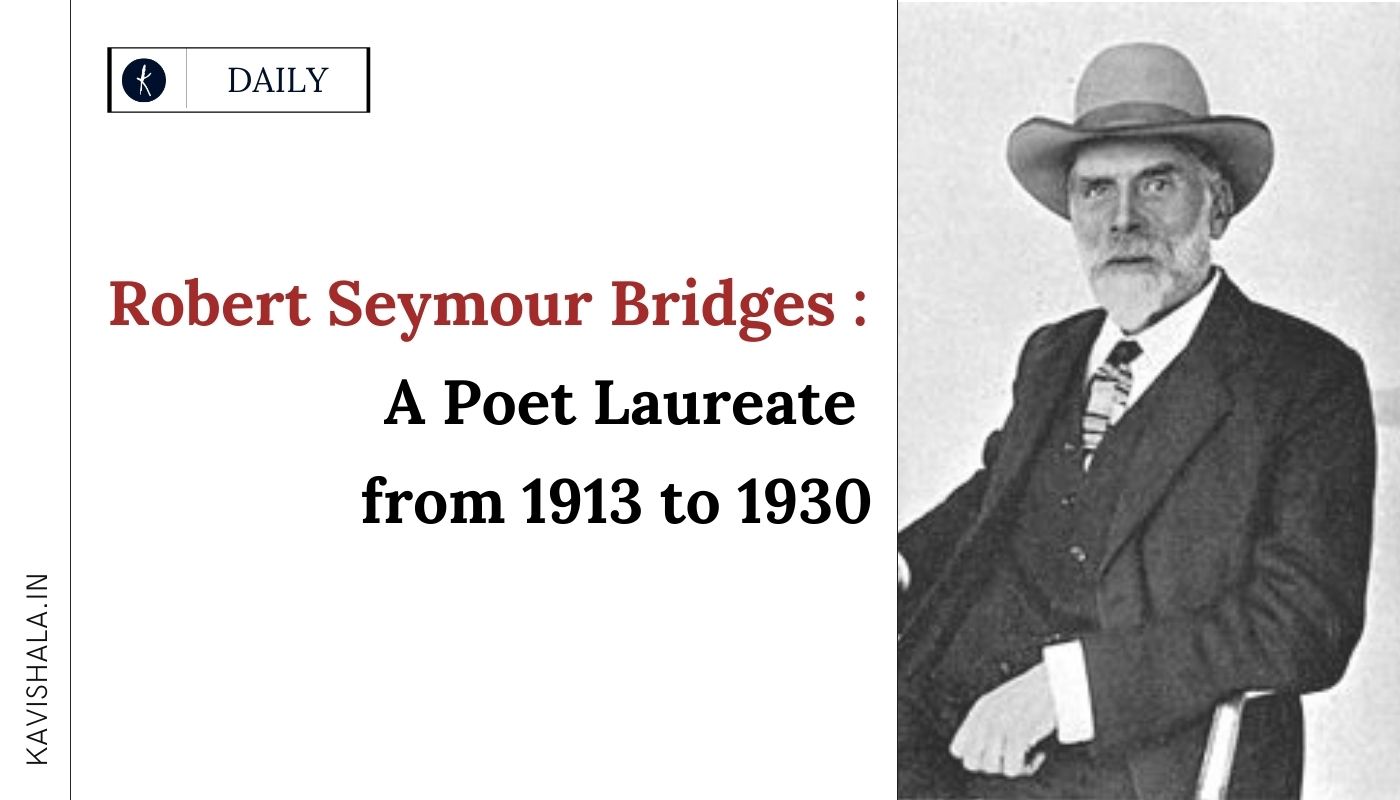 Poem :- "I Love All Beauteous Things"

I love all beauteous things,

I seek and adore them;

And man in his hasty days

Is honoured for them.

I too will something make

And joy in the making!

Explanation : Poet writes that he admires Nature which god has created but, never been praised for it completely. People instead of praising god for his creation honours men who are just in haste. And, he himself will also create something in this world one day but, he feels like that he will not be praised for that too as if it is a dream whose selected words could be remembered and not the whole dream.

Bridges' literary career did not suddenly flower when He retired. In 1873, the year before he received his MB from St. Bartholomew's, Bridges published his first book of Poetry, entitled Poems. By 1881, the year he retired from Medical practice, he had published a poem in Latin on St. Bartholomew's Hospital, two more anonymous series of Poems, and an anonymous series of sonnets entitled The Growth of Love. This last publication was so popular that the two Anonymous series of Poems were subtitled "By the Author of The Growth of Love." Between 1883 and 1895 Bridges wrote most of his plays, The most noteworthy being Prometheus the Firegiver (1883), Nero, Part I (1885), Achilles in Scyros (1890), and The Return of Olysses (1890). These are generally closet dramas, And although Yeats wanted to produce them and Bridges himself thought they were fit for the stage, they were never Produced and received only mild critical notice. During this Period Bridges also wrote Bros and Psyche (1885) and the First version of his essay Hilton's Prosody (1893). The Five books of Shorter Poems appeared at this time and were Collected in a single volume in 1894. Not all of Bridges' Energy was focused on his work at this time, however. After He gave up medicine. Bridges moved to Yattendon to live with His mother while he recuperated. In 1884 he married Mary Monica Waterhouse, and he spent the rest of his life in virtually unbroken Domestic seclusion, first at Yattendon, Berkshire, then at Boar's Hill, devoting Himself almost religiously to poetry, contemplation, and the study of prosody. Bridges, who experimented with new meter virtually his Whole life, is generally cast as a classicist, not as a Romantic or a harbinger of modem poetry, much of which is characterized by metrical and thematic innovation. Bridges was poet laureate from 1913 until his Death in 21 April 1930.

The sickness of desire, that in dark days

Looks on the imagination of despair,

Nor but in sleep findeth a cure for care.

Incertainty that once gave scope to dream

Of laughing enterprise and glory untold,

Is now a blackness that no stars redeem,

A wall of terror in a night of cold.

Fool! Thou that hast impossibly desired

How nought is changed: Joy's wisdom is attired

Splendid for others' eyes if not for thee:

Not love or beauty or youth from earth is fled:

If they delite thee not, 'tis thou art dead.

Explanation : Poet says, when you are surrounded by dark days of despair. So the yearning of your desire starts making you restless. Pray to God, and forget all. The uncertainty which used to be fulfilled in dreams, now I can't even sleep to get it. The laughter is over, as if the stars cannot erase the darkness of the night. On a cold winter night there is a wall of panic and restless despair, you see nothing has changed. The wisdom of happiness is ready, but it is not for you but for others. And, you're probably dead if you feel that love and beauty are equal to the beauty of Earth's nature.