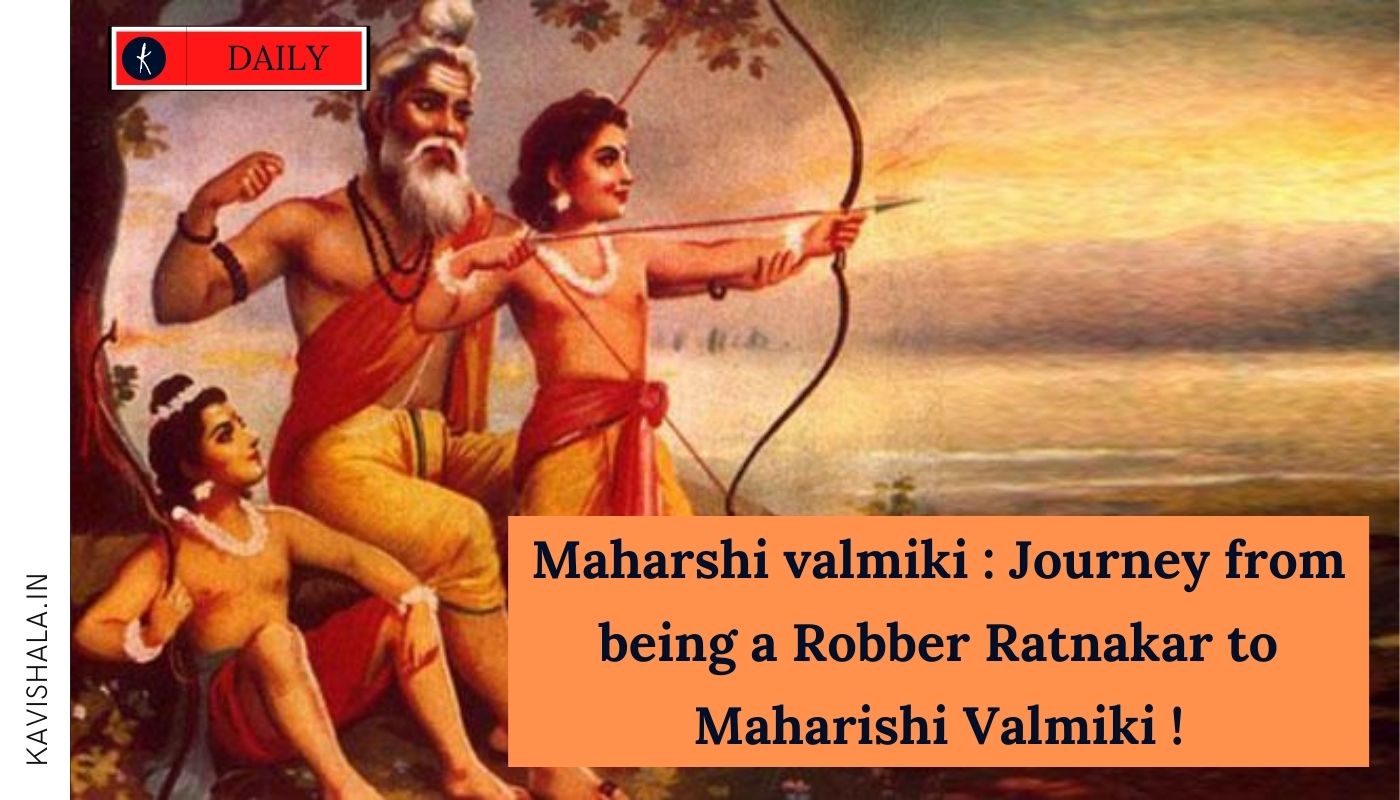 Maharshi valmiki : Journey from being a Robber Ratnakar to Maharishi Valmiki !

“To be happy always is something which is difficult to achieve. That is to say, happiness and sorrow alternate in one’s life and there cannot be uninterrupted happiness alone.”

Valmiki’s real name was Ratnakar. He was the son of Prachetasa, a sage. Before this Valmiki was a robber by profession. Later with the teachings of Maharshi Narad he became a Rushi. Valmika in Devanagari means “ant- hill” .

How he became valmiki?

Once when he was a very young boy, he had gone to the forest playing and was lost in the forest. His parents searched for him but could not trace him. They thought that the boy has been eaten by some wild animals. An hunter and his wife took the child and brought up the child as if their child. He was taught of the hunting and he learnt it fully. Later, the boy grew young and he was married to a girl from another hunter family. He got children also. When Ratnakar’s family grew with the addition of children, he felt it uneasy to maintain his family with the little income. So, he took to a new profession of Robbery and went on attacking the people for money.One day Maharshi Narad who was singing in praise of Srihari with Mahati named Veena, was passing nearby. Ratnakar, the hunter saw him, attacked him, shouted And demanded whatever he has, lest he shall brake his Head. Narada was not frightened and told him that he Has only the Veena, which he offered to give. Ratnakar saw the smiling, innocent face of Narada who Was never frightened and was astonished at this. On Seeing Narad’s face, Ratnakar’s cruel mind also Melted with kindness. Narad Maharshi sat beneath a Tree and was singing Harinam sankeertan. Narad Maharshi told Ratnakar that Robbering and Killing of animals is sinful job and asked him to give up That profession. Narad Maharshi told him to ask his Parents, wife and children as to what profession – Robbery is a sin or not? Ratnakar thought Narad Maharshi is trying to escape from him by sending him to His parents and tied Narad with a rope to a nearby tree And went to his house. Valmeeka(the ant-hill) cleared the ant-hill and blessed Ratnakar to be a Maharshi. Ratnakar came out of the Valmeeka . That is why he is called as “Valmiki”. Who told Valmiki the story of Sri Ramachandra? One day Narad Maharshi met Valmiki and told him the Entire story of Sri Ramachandra – Dasharath’s Putrakamesti yaga, Ramachandra’s birth, his education, His journey with Vishwamitr and his killing of Tataki, Subahu, his step-mother Kaikeyee’s order to go to Forest, killing of Rakshaas there, missing of Seeta Devi, Meeting of Hanumanth-Sugreev, his journey to Lanka In search of Seeta Devi, killing of Ravan-Kumbakarn, And finally getting back to Ayodhya, ruling of the Kingdom, etc.

What made him to write the “Ramayana” ?

Once Valmiki on his way to Ganga Snaan, came across A stream “tamasa”, seeing the stream was astonished And decided to have his bath in the stream. When he was looking for a suitable place to step into the Stream, he heard sweet chirping of birds, he saw two Flying birds together. He was pleased to see the happy Bird couple. Suddenly the male bird fell from the sky After being hit by an arrow and was wounded. The Spouce bird was screaming in agony. Then he realized That the bird was hitten by a hunter. Valmiki’s heart was Felt with pity. Suddenly came out from his lips, the

This is the first shloka of Ramayana. It is regarded as The first shloka among all the puraanaas. He is regarded As the first Kavi or poet, i.e., “Aadi Kavi”. Ramayana is Also titled as the first Kavy. Meanwhile Brahmadev, came and told him to write Ramayana with whatever story he has listen from Narada Maharshi. He also blessed him to see whatever has Happened in the past and whatever he writes will be true. Valmiki brought up the children of Sri Ramachandra – Luv and Kush. Why? Once after Sri Ramachandra killed Ravan-Kumbakarn And brought back Seeta Devi, was ruling Ayodhya Peacefully. But he heard a citizen of Ayodhya, telling that “Ramachandra had brought back Seetadevi, who was Imprisoned by Ravan. Sri Ramachandra was wrong in Bringing back her”. On hearing this Ramachandra told His brother Lakshmana to take Seetadevi and leave her Near a sage’s ashram. Before this, once when Seetadevi was pregnant. Ramachandra asked Seetha –“ You are carrying a child. Any wish you want to fulfil from me?”. Seetha Devi told “ I don’t have any wish. But when we were living in forest, We used to go the Ashram of Rishis but I could not give Anything to Rishis. Now, I would like to spend some time With Rishi’s wives”. Ram had agreed Considering these facts Sri Ramachandra had asked Lakshmana to leave Seeta Devi near the Valmiki Ashram. Seetha Devi gave birth to Luv-Kush, the Twins. As such Seetha Devi was in the Ashram of Valmiki and Luv-Kush were brought up there. Valmiki Maharshi himself taught the children all the Veda Paataa, and adhyan of Weapons. He also did the Upanayanam of the children. He also taught the entire Ramayana to the children – Luv & Kush. They were Singing all the time and once they sang the Ramayana in Front of Sri Ramachandra when Rama came to know that They are his own sons, who were staying with Valmiki.

“There is no deity powerful than time.”