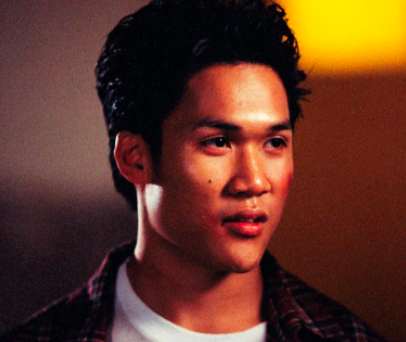 I once knew this girl named Nikki,

I guess you could say she was a sex fiend,

I mean, she was a dancer... well actually a stripper,

And that is to say, to see her naked, you'd have to pay,

Anyway, one night I was in a devious mood,

Rendezvous with my boys in the club up the street,

Eighteen and over, must have ID."

So there I was sitting in this seedy joint,

Wondering, what would my moms think if she'd ever caught me here.

Then out comes this girl,

Petite physique, her body was perfect to me, you see?

Then there I was,

Caught in a moment,

Something is strong I sensed as she danced,

Removing articles of clothing from her body,

But not once removing her eyes off of me.

And I felt that either she was the greatest dancer in the world,

Or somehow I managed to touch something real,

Something pure, something powerful,

I want to get in you,

Well, let me slow down,

See, the show ends and she comes and talks to me,

And of course, I play the shy role,

And she bites and yo, yo, you don't even know the half of it,

She winds up in my crib and sees if I can take a stab at it.

And we get into this dance and we,

We move together, and we fit like puzzle pieces,

If you know what I mean,

And then she whispers in my ear, "Pull my hair."

And then she says, "Har-Der,

And not at the roots but at the ends because it hurts more."

But I never wanted to hurt her,

But somehow I didn't think she would let me,

And then she says, "Choke me."

Now you know me, I mean, I'm a gentlemen so I tried to do it gently.

And I don't know what to do!

I mean, all of a sudden I'm in this artsy S&M documentary or some sort,

With this girl riding me,

Pushing me to the limits of my sexuality,

And I have to stop for a hot second and say,

And that started the wrestling match,

As we tossed and tumbled around my bed like two lion cubs,

That play on the discovery channel,

And then she wounded up on top of me again,

Well, I have to admit, I was a little lit,

See she intoxicates me,

And somewhere in the back of my mind, I say "What the fuck."

And with the palm of my hand I graze the skin on her chin,

And I don't know what to do!

I mean, I'm not the kind of guy who hits girls,

And I don't even know why this would be getting her off,

But we were playing chess and she put me in check,

So I slapped her on the cheek and we tore each other apart,

And yo, I don't know what she saw,

But me, I was blinded by white lights,

Lying naked next to her, quivering,

We escaped ourselves and each other.

I guess you could say she was a sex fiend,

But don't judge her or me,

It's just a place I've been.