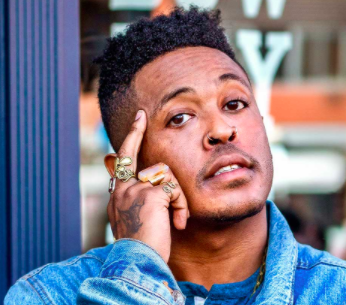 scooby-doo was trying to tell us something when every time that monster mask got snatched off it was a greedy white dude.

in ’97, a black comic gets on stage, says, you ever notice how white dogs be like woof woof & black dogs be like ruff ruff motherfuckaaaaa!!

the dog upstairs won’t shut up & i’ve thought of ending his little noisy life but i have to remember he matters he matters & if i did the brown girl upstairs would cry forever.

dawg (n.): a man’s best friend. (see: blunt rolled already, handshake, my nigga, put me on.) ex. my dawg died, he did it with his own hands.

dogs in this house eat the same thing we do. we eat greens, he eat greens. fried bologna, neck bones, leftovers.

... he died from the suga, the gout or whatever came for big mama came back for the dog.

everybody love Lassie, but what about Sounder?

i too have been called boy & expected to come, kneel.

what Animorph did you want to be? i wanted to be the boy who turned into the bird limp in the dog’s wet mouth, holding me toward his human saying  I made this for you.

the dog upstairs needs to stop running his mouth talking all that shit I can hear him up there fool don’t think i understand he don’t know i got a bark too teeth too thumbs & a terrible child’s mind.

something about Air Bud felt ... the talented obedient beast, the roar of the eggshell crowd.

dogs aren’t racist but they can be trained to be so as can the water as can the trees as can gravity as can anything marked by a pale hand & turned bloodgold a bitter king’s magic touch.

i’m the kind of werewolf that turns into a shih tzu. ruff ruff motherfucka.

while my grandmama spoke on the clean blood of Jesus i watched the hounds in the mud hot for anything warm & thought of something better to worship.

i stand in the dark bathroom in my tightest shortest shorts my vaselined legs the only things catching light. i say i’m a real bitch 3 times, clap my hands above my head. nothing happens. i walk back into the club, put my hand on a man’s chest & it’s a paw.

the gay agenda made CatDog to offer your child’s gender to their seven-headed god.

a dead dog is a hero, a dead lion is a hero, a cloned sheep is a miracle, a dead child is a tragedy (depending on the color, the nation, the occupation or non- occupation of the parents).

during the new moon i switch from an –a to the traditional –er, i raid the farm, smash the melon patch, swallow chickens whole, spit out the bones ground down to smoke, howl Geee-zuss! toward the sky’s great nothing.

dude’s dog won’t leave the room won’t let his lord out of his sight won’t let his master disappear won’t let himself go hungry won’t let nothing happen to the one who brings the water even if it means being owned, being witness to his hunger. or maybe he’s just dumb.

i listen to DMX smoking a blunt doing bout 90 in a 55 when the cop ask if i know why he pulled me over i say i’m just trying to be me.

the dog upstairs won’t shut up but i can’t hate him he’s up there alone all day making noise must be the only way he knows he’s not a ghost.